This time around, you play as Assassin turned Templar Shay Patrick Cormac, following him through disjointed memories throughout his life. About a third of the way into the game, something happens (not going to elaborate on what for spoilers sake) and Shay abandons his Assassin life and years later joins the Templar’s in their fight to control bits of the world and universe. The story is Rogue's strength, with Shay being one of the more complex 'Creed characters we've seen in some time. He's not all bad, but not all good either. He is just a man doing what he believes is right after witnessing both sides of the power struggle we've been apart of since the first Assassin's Creed. The story is engaging and the throwbacks to Assassin's Creed III and IV are done very well and the game does it's past iterations credit with less obvious nods to previous games thrown in throughout. It's a nice touch that ties up the last generation games very well and as a fan of the series, I was pleased to see this occur.

Everything else however feels thrown in. All of the wonderful exploration “missions”, fleet missions, ship upgrades, sea shanties, even collecting new weapons/upgrading Shay all feel like something that you don't really need to do this time around. I only once upgraded my ship, and upgraded Shay maybe three or four times outside of the things you gain naturally throughout the progression of the story. It's a shame. The side missions and exploration were what made me love Black Flag so much last year, and to see these things just kind of be thrown in to make a more complete game worth a AAA price are shocking. The attention to detail outside the story is severely lacking, with many of the side missions (at least on the Xbox 360) having bugs or graphical glitches too numerous to recount here. The graphics also look a bit dated. Character models when not in a cut scene are out of sync with the words being spoken at times, hair looks abysmal, and clothing sometimes moves out of sync with the rest of your character, even in a cut scene. It's silly things like this that make me wonder sometimes how the game passed QA inspection, as this has been an ongoing issue in AC games for years. The music is still one of Rogue's strong points, with sweeping melodies and, of course, the return of the shanties while sailing. They all lend to a great feeling of immersion and I was glad to see this was not an area where corners were cut this time around. The music didn't make me want to rush out and buy the soundtrack like I did with Black Flag, but it was still very well done.

The old Assassin's Creed movement issues plague Rogue as well. You can be running along and suddenly hit an invisible wall, or be trying to chase after a marked character on your screen and suddenly start running up the wall next to you. You would think after years of these issues, Ubisoft would figure out how to fix them. When Ubisoft announced Assassin's Creed: Rogue earlier this year, it was met with some fanfare and some backlash. With Unity being revealed as a next-gen only game, fans were wondering what, if anything, owners of the Xbox 360 and Playstation 3 wo 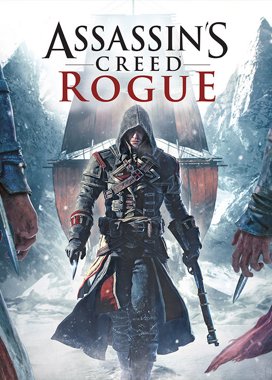 Looks and feels like AC IV: Black Flag, which is a good and bad thing.

All of the issues aside, if you can overlook the same old Assassin's Creed issues, Rogue is a fine entry in the Assassin's Creed series and wraps up the Kenway story line (and by association the last generation games) well.
Overall
7.0
Story
7.0
Gameplay
6.5
Graphics
6.0