Since 2009 Assassin’s Creed has been an annualized franchise. Ubisoft tried to ease the series fatigue with major changes, but ever since Assassin’s Creed: Brotherhood introduced the ability to recruit and lead an order of assassins; Revelations and Assassin’s Creed 3 failed to add on to this.

However Assassin’s Creed IV: Black Flag is a little different taking the ship combat of Assassin’s Creed 3 and building it into a true open world, a first for the series of course. Adding these mechanics together Ubisoft has delivered one of the most successful Assassin’s Creeds to date but is the story up to par?

Assassin’s Creed IV: Black Flag stars Edward Kenway, a pirate in the turn-of-of-the-18th-century Caribbean. Shipwrecked and drawn into the conflict between power-hungry Templars and their enemies the Assassins.

Previous Assassin Creed games have revolved around the war between the Templars and Assassins. Edward isn’t the series traditional lead often showing very little allegiance towards others than his crew throughout the game. Often being more comfortable wandering the ocean in search of one big score after all it’s a pirate’s life.

While many of the games basic mechanics have been cleaned-up and combat being more or less the same, Edward still free-runs like his ancestors and descendants. However many of the traversal problems that hung over previous Assassin Creeds are gone.

As Ubisoft brings back the verticality and climbing challenges the series made its name on, but does it live up to expectations on the ship? I often found myself climbing and getting frustratingly lost with so many crisscrossing platforms and beams. But towns and cities in Assassin’s Creed IV have few of those problems. While there are often little story reason to engage in cite-wide free-running there are multiple contracts and those all-important sea shanties floating about that you can collect on your passing.

Hunting returns to Assassin’s Creed IV with more incentive to chase after wild deer, or later hunt white whales; crafting most of Edward’s personal protection and capacity. Money meanwhile, is good for buying new equipment such as swords, guns and various other items, but is also a one of the vital elements for upgrading your ship the Jackdaw, in tandem with this you will need wood, cloth and metal. This is where the ship-to-ship combat comes into to play the more resources you obtain from boarding enemy ships the more you can upgrade your ship, this of course is where the open world comes into play allowing you to find bigger ships for bigger prizes. Or even steal these items from warehouses occupied by British or Spanish forces.

But that’s not all that’s improved the broken point-to-point sewer system used in previous games is gone, instead making sync points in cities fast travel locations. As captain, Edward can board his ship, the Jackdaw, and sail more or less unimpeded around the world, discovering new harbours, islands and new secrets. The only things prevent you reaching those are storms and other ships which is a good reason to upgrade you ship as much as you can.

This effectively gates parts of the open world till later in the game when you’ve been able to upgrade your ship enough to be able to conquer those sections of the world. Encountering loading screens is extremely rare and often limited only to entering cities or new story sequences.

Taking the fun ship battling experience we all had in Assassin’s Creed 3 and making it one of the best parts to Assassin’s Creed IV, it’s unlike any game I’ve every played. Even the basic act of sailing the Jackdaw was gratifying as I called out commands to my crew sailing the mighty sea before sinking great ships like man of wars.

Since 2009 Assassin’s Creed has been an annualized franchise. Ubisoft tried to ease the series fatigue with major changes, but ever since Assassin’s Creed: Brotherhood introduced the ability to 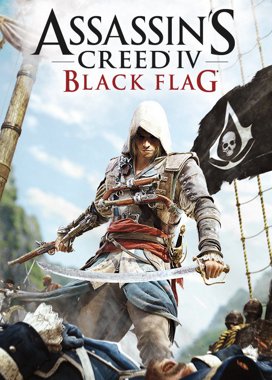 Assassin’s Creed IV: Black Flag mechanics are a great improvement upon previous titles in the series; making the wonder of sailing the ocean as I out run armada’s, hunting whales or boarding ships seem amazing. But the story felt a little directionless this time round because it’s a new protagonist and trying to not give the game away on the bigger picture Ubisoft has in store for the Assassin’s Creed series.

Assassin’s Creed IV: Black Flag was reviewed on retail versions of the PlayStation 4 and Xbox One over a period of seven days.