Visual novels are a niche thing. Its probably due to the fact that they've long been the domain of busty anime girls just dying to get into your pants and provocatively leaning over with their dress half open. While these are all well and good for a certain slice of the market, it leaves many of us in the shade (and honestly, giggling and pointing fingers). Is VA-11 HALL-A, a self-confessed waifu bartending game, really likely to break that mold?

For a visual novel, writing doesn't always take precedence, as odd as that sounds. Usually, its a case of a loosely pulled together turn of events that allows for a fade-to-black for a sex scene, perhaps even a nipple slip. VA-11 HALL-A focuses on relationships, delving into a fantastic cyberpunk universe and how that world takes it's toll on the colourful characters passing through your fine establishment. Every character pops off the screen with their own bizarre take on the world they find themselves in. From journalists to robotic 'Lilim' sexual deviants to hackers-that-hate-being-called-hackers, there are folks from all walks of life swinging through. This really keeps the content varied with the added spin of never knowing when or if they'll ever grace your bar again. After all, they're just clients, right?

It should be noted, sex is a semi-central portion of the plot. There's a lot of discussion around it, but that's just it, it's discussion. It's very tongue-in-cheek, wry and not peeking-over-the-toilet-cubicle cringey like it is in a lot of visual novels. Sex is an open and available thing in the future and it's treated as such within the universe. It happens, its discussed casually (and comedically) and then you move on to the next amusing topic. You will definitely see some eyebrow raising moments, but nothing that would be out of place in most bar side conversations (although Streaming-chan may push the boat out with an all-access Premium pass at just $99.99, trust me...).

Sexuality is another normal topic. Its not shoved in your face, its nothing important for most of the characters, but most of the LGBT spectrum is covered at the bar. This scratched a HUGE itch for me. When LGBT characters are included in a game at all, its usually to huge fanfare, neon arrows pointing towards the individual and a general shout of HEY LOOK, WE'VE STUCK A GAY ONE IN HERE, AREN'T WE UNDERSTANDING?! VA-11 HALL-A just has characters that fall wherever they fall on the spectrum, they date whoever they date and its only as important as the plot makes it. Thank you Sukeban Games for handling this balance so well.

Gameplay is an odd one here. There are some elements included, you mix drinks to order based on a bunch of ingredients, making them to order for your clients and how well you do so effects the story. You also have the ability to buy various gadgets and luxury items for your apartment while trying to keep enough money aside to pay your bills, again this effects the story. Beyond this, ultimately the gameplay is just a mechanic for pushing along the story and tweaking the path you take. There's nothing intrinsically wrong with this and there are a couple mini-games popped in here and there which I haven't managed to unearth yet, but it feels like there could be more but they decided not to go down that route.

The art style in the game is beautiful. There's a retro-futuristic theme throughout that works fantastically well. Everything is bright colours, capitalism and shiny in a way that just beds perfectly with the universe built up around it. Each character looks the part, there are adorable (albeit annoying) dogs wearing awful clothes and augmented barely human bar flies a-plenty.

There's also a really nice move away from typical visual novel territory in here. Usually you will see a 2D, occasionally moving cut-out of a character floating on screen and that's your lot. Here, your characters will occasionally move into a different scene with it's own unique art style for a different type of interaction which really sets this out from the crowd. While its not necessarily ground-breaking, it works to break up the potential monotony of looking over a bar at everyone. A neat touch.

Ultimately, I suppose my real gripe with the game is that there's not enough of it. This is a vertical slice of a universe with little of the way of outside lore offered. I understand that this is a story set in the world but I want to know more about it. There are a bunch of threads that are left spoken around but not fully fleshed out, there are limitations to not seeing much outside your bar or apartment and it's a shame. There's a thriving world out there just begging to be shown off and talked around a lot more, but the game doesn't have space to look into them. Multiple endings will cover some of those bases but not nearly all of them.

That being said, if 'there's not enough of it' is the only real complaint for a game, that's hardly all that bad, right?

Visual novels are a niche thing. Its probably due to the fact that they've long been the domain of busty anime girls just dying to get into your pants and provo 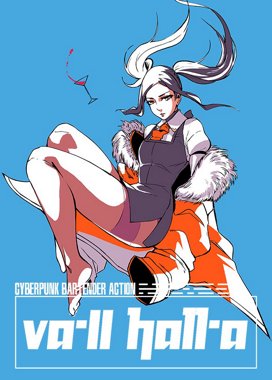 An amazing story set in a mesmerising universe.

There is very little wrong with VA-11 HALL-A. The universe is amazing, the writing is terrific, the characters are amazing. I just wish there was a little more on offer.