Point-and-click adventures are typically a pretty chilled-out experience. Sure, at times, they can be difficult. Sometimes, they can even get frustrating. But when I’m tired, stressed or just in need of some good ol’ fashioned storytelling, it’s the genre I turn to for a little bit of old-school fun. The Darkside Detective, on the other hand, eschews the slow-paced nature of its stablemates in favour of a quick-fire series of tiny adventures, consisting of short puzzles and cheeky one-liners. It’s an unusual game, and one which regularly hits the mark but occasionally veers wide of it as well.

You play as Detective Francis McQueen, one half of the Darkside Division of the Twin Lakes Police Force. Along with your bumbling sidekick, Officer Dooley, you keep the city free from weird and spooky goings on. This is a brilliant premise, allowing for the relentless spoofing of horror tropes and cliches. Over the course of the game’s six episodes, you’ll find yourself unionising a horde of zombies, watching the ghosts of Douglas Adams and Terry Pratchett play a game of chess and ridding a police station of marauding gremlins. The jokes come thick and fast, with almost every piece of dialogue being so tongue-in-cheek that the game’s horror setting is turned upside down. The scary stuff is here purely to be poked fun at and while the odd joke will fall flat, on the whole, it’s solidly written. Regular nods to pop culture, especially ‘80s and ‘90s horror movies, as well as references to classic point-and-click games make this a thoroughly entertaining romp through an utterly ridiculous setting. 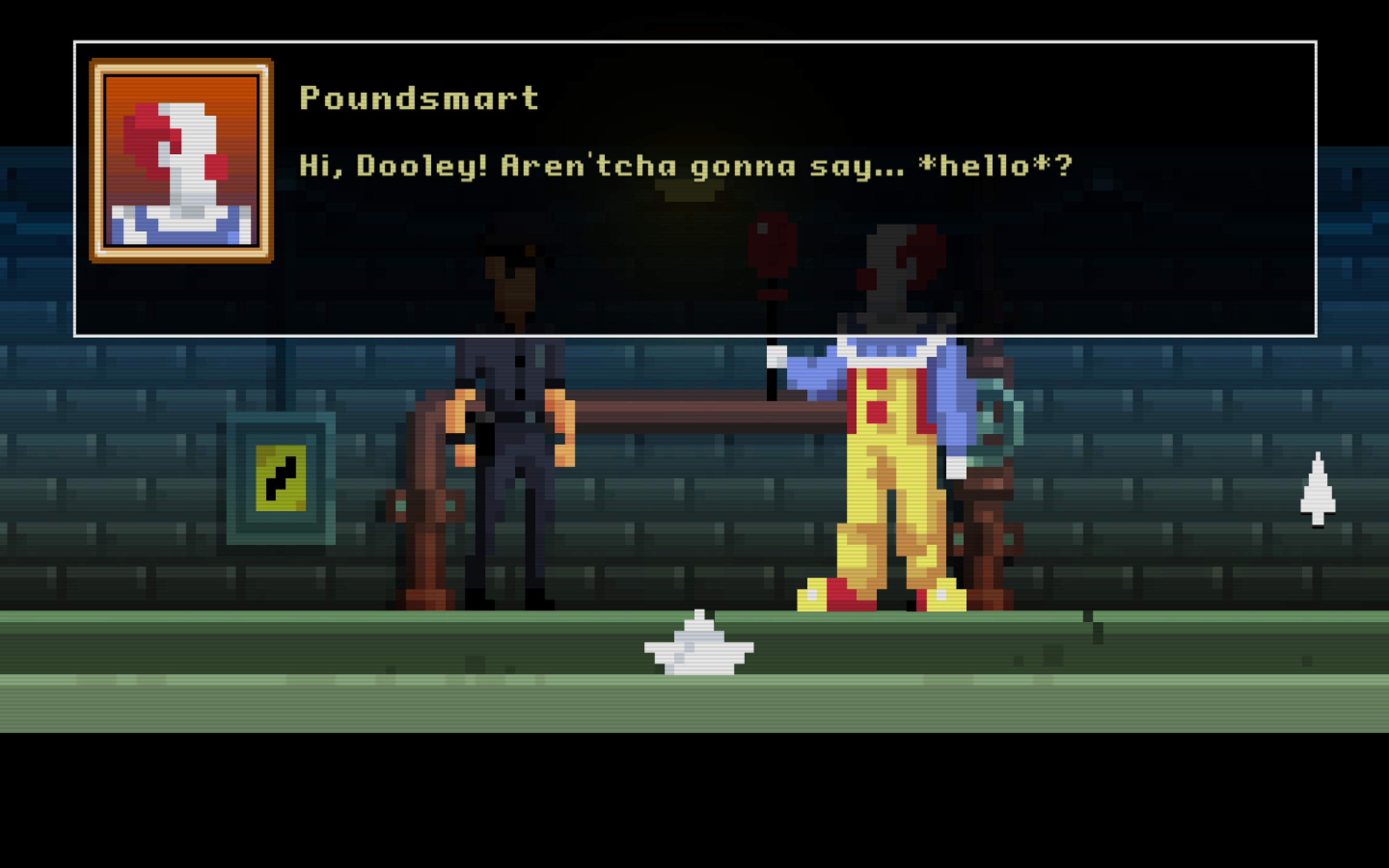 Unfortunately, Darkside Detective begins to show a few cracks when it comes to the gameplay. Irish developers Spooky Doorway opted for a speedy approach to adventuring, cutting out lots of the traditional elements of the genre and stripping it back to its bare bones. You don’t move Detective McQueen around each screen, he simply stands there while you click on things. This allows you to move from screen to screen in an instant and robs the game of any sense of traversing a large distance. This is a shame, as the levels, which include a spooky summer camp with a big lake in the middle, or a sprawling library with four floors, should feel massive. But when you can move from one end of it to the other in under five seconds, it makes the game feel smaller than it actually is.

Furthermore, the puzzles seem unnecessary and uninspired. Most of them are very easy and some of them are directly ripped off from other games, such as the pipe hacking minigame from Bioshock or the oft-used sliding square puzzle. This isn’t necessarily a bad thing, after all, there’s a reason they’ve been used so much. But when combined with the rest of the gameplay, which mostly consisted of just clicking on everything and anything until something new happened, I found myself extremely underwhelmed. There’s no real challenge here and thanks to the 8-bit pixelated art style, there were a lot of instances where I found myself moving from room to room, clicking on every pixel until something worked and I could progress. 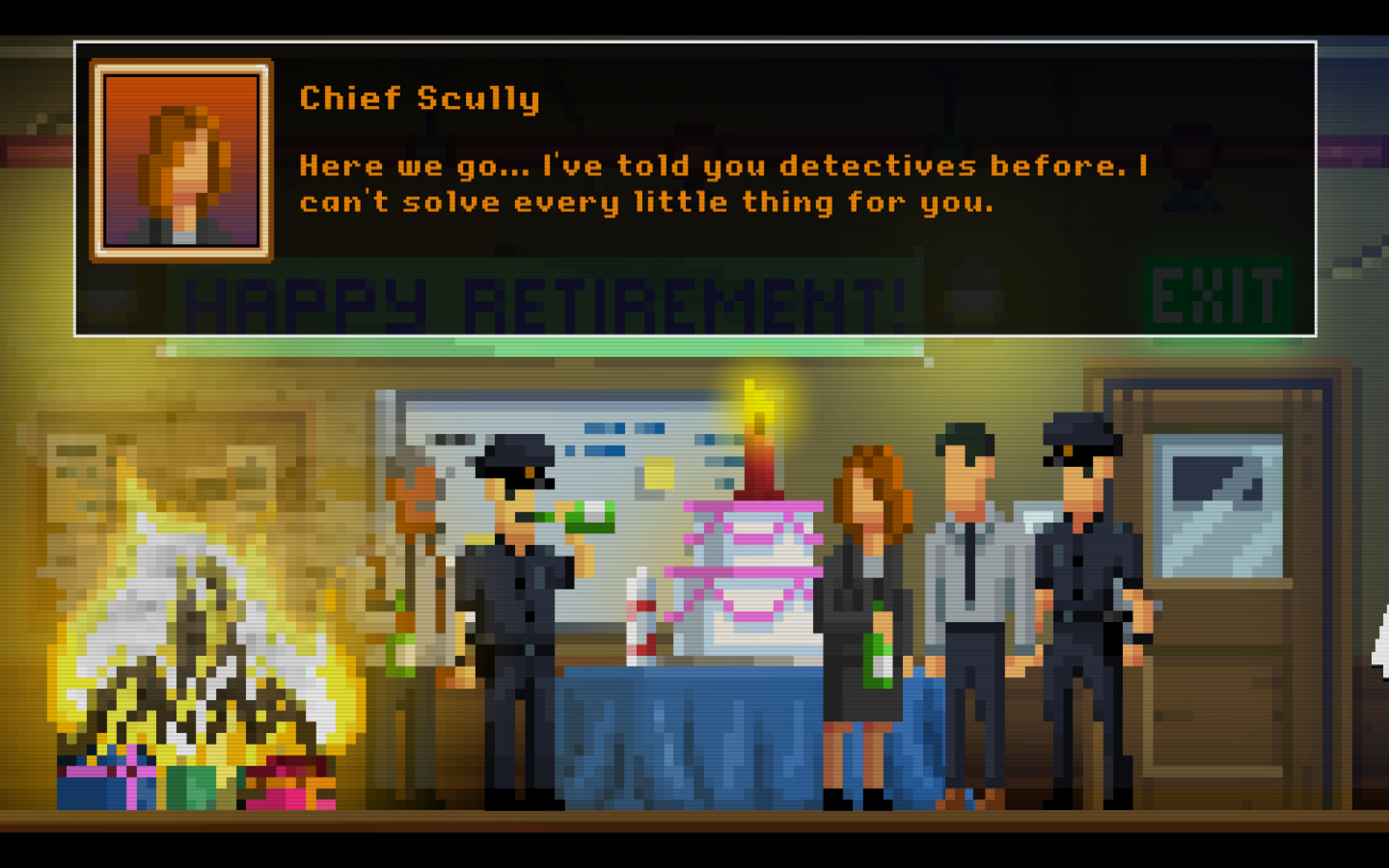 However, perhaps I’m being too harsh on The Darkside Detective. If you judge a game on whether or not it achieves what it sets out to then this one is most definitely a success. The game’s mechanics are clearly there to serve the story as it unfolds with increasing hilarity, and it does that exceptionally well. I was certainly never bored, nor was I annoyed and the short run time of each episode meant that it never felt like it was dragging. The pixel art is very pretty as well, which certainly helped, as did the low-key, minimalistic soundtrack, evoking memories of games like Deus Ex, as well as the films of John Carpenter.

Despite it’s somewhat lacklustre gameplay, The Darkside Detective is definitely worth four hours of your time to play through. The writing is excellent, the characters are thoroughly likeable and this is an absolute must-have for any fan of horror, especially ‘80s and ‘90s slasher flicks. You can grab it on Steam right now for $9.99/£7.69.

Point-and-click adventures are typically a pretty chilled-out experience. Sure, at times, they can be difficult. Sometimes, they can even get frustrating. But w