South Park: The Stick of Truth launched in 2014. When it released, it garnered huge praise from both fans and critics alike. Bringing together traditional RPG elements, turn based Paper Mario style gameplay, and South Park was a match made in heaven. Not to mention the fantasy setting that in traditional South Park style blended stories like The Lord of the Rings, Game of Thrones, and Dungeons and Dragons to take a simple activity like kids playing “Fantasy” and blowing it up into an alien and Neo-Nazi conspiracy story the likes of which has never been seen nor will be seen again.

Needless to say, South Park: The Fractured But Whole (which, when they announced the title, I admittedly laughed for a solid minute at the pun because I’m perpetually a 12 year old boy) had its work cut out for it. To be a sequel to one of the most surprising games of all time was a huge task to live up to, then to have to expand upon the previous titles success and improve its failures seemed almost impossible. So, does The Fractured But Whole manage to climb to the top of the mountains of its fictional Colorado town or does it crash and burn into the pits of hell conveniently located beneath it? Come on down to South Park and lets find out together.

Picking up right where The Stick of Truth left off, we find our favorite Colorado mountain town on the brink of yet another disaster. You play once again as the New Kid and it doesn’t take long before you're thrown back into the action. Deciding that they’re “bored” of playing fantasy kingdoms or whatever the hell Eric Cartman calls it this week, Super Heroes are now the flavor of the week and Eric Cartman’s Coon and Friends are pitted against Timmy’s Freedom Pals in a Civil War-esque battle of the super hero franchises complete with Marvel/DC inspired movie and Netflix series ideas, it's truly laugh out loud funny and a sight to behold.

As The New Kid, you can pick your super powers to start out the game, leading to a Coon narrated “back story” for your character that, in Eric Cartman form, makes absolutely 0 sense. You can also pick up other sub-classes along the way as well, giving you a nice variety of powers to choose from for combat purposes. The story starts off simple enough, with The Coon investigating the disappearance of a cat, Scrambles, to bring a $100 reward that will “prove that the Coon and Friends franchise is the best of all time and propel our franchise to stardom” according to Eric. Again, in typical South Park fashion, it doesn’t take long for things to spiral out of control, exposing the kids (and their hero alter-egos) to a larger world involving the local police, mafia and crime syndicates, and the the return of Mitch Conner. Yes, South Park friends, Mitch Conner makes another appearance and its as funny as you might imagine, but I don’t want to give too much of the story away here. Trust me, this is something you want to experience for yourself.

The combat system has been completely overhauled, and that in itself is a welcome change. Gone is the Paper Mario style turn based gameplay that became a face roll by the end of The Stick of Truth. In its place, we have a grid based combat system that works incredibly well. Each character has a set number of squares you can move on the grid while your abilities also have a set number of squares or distance they can attack. For example, Coon has a Claw-dash ability that allows him to fly three squares forward, attack the enemy, and then dodge behind them, putting him in prime position for another attack. It's a well thought out system that had me stopping to strategize a number of times during the larger boss style encounters. You can also pick up various items that affect combat along the way. From a full team healing depiction of Moses, to Jimbo using his love of guns and grenades to mow enemies down for you, these power ups can change the tide of the harder battles to your favor and they’re just fun to watch happen.

The amount of detail in this game when it comes to crafting, the look of your hero, and collectables once again is superbly done. The crafting system is deep and rewarding, allowing you to craft everything from artifacts to power up your power level to new costumes for your hero, to items that change the world around you. It honestly still surprises me that this much care was put into a traditional RPG system like this in a South Park title. When you think of South Park, you don’t think of these deep, rewarding systems, and its always a nice thing to see. The amount of different costume pieces you can collect, craft, and wear as your hero are seemingly infinite and all of them look incredible to boot.

My favorite combination so far includes the Twitch Prime package, an Assassin outfit, and some gloves that give off a glowing effect. Its totally random, and yet it totally works for my character and I laugh all the time seeing this guy walk down the road and interact with other kids and adults alike who are seemingly none the wiser on how ridiculous I look. Gone from this title are the Chinpokomon collectables, replaced with Yaoi photos this time around and wow, are some of these Yaoi photos just laugh out loud hilarious.

The art and music style are just perfect for this game as well. The graphics are so well done it looks like you’ve stepped into an episode of the show. While that does mean that nothing is mind blowingly photo realistic or anything like that, thats just fine here. This is a South Park game. If it suddenly looked photo realistic, you’d complain and wonder where South Park went wrong! The music is such a joy to listen to that for the first time in awhile, I haven’t turned it down or off completely in the menus.

The super hero spoofs are plenty, there are nods in the music to popular songs in pop culture, including a moment with Tweek and Eric with notes from “My Heart Will Go On” in the background that had me rolling laughing. It was so well done and just so unexpected I couldn’t help it. The battle music is also just so damn good, that I would honestly pull some of it for a playlist if I can find it. It’s this blend of rock and heavy metal tones that just complete the serious feel of each battle you go into and I always want more of it.

South Park: The Stick of Truth launched in 2014. When it released, it garnered huge praise from both fans and critics alike. Bringing together traditional RPG e 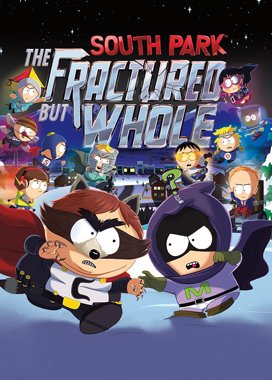 South Park: The Stick of Truth is now the 2nd best South Park game of all time...

Overall, this is game you just have to play. It is a top contender for my Game of the Year, and should be in the conversation for other awards as well. I can't stop playing and I honestly can say that even after I beat the game, I wanted to go back and play it again with a different load out just to see what I missed the first time around. This game is that good. Go buy it.