Legendary designer Sid Meier is one of gaming’s earliest celebrities. It probably helps in that regard when you put your name on every game you make, but there is no doubting the calibre of the man who brought us Pirates and Railroad Tycoon. However, it is his Civilization series which has always brought him the most praise. Now in its 25th year and 6th increment, it is one of the most recognizable PC games of all time and widely considered to be the greatest strategy series ever conceived.

2010’s Civilization 5 took some big, controversial leaps which eventually paid off. The change from square-based map movement to hexes provided a much needed shake-up for the franchise and was widely praised as the jolt of electricity the ageing series needed to bring itself into the modern age. It made the game feel faster and more fluid and created a culture of competitive online play which was formerly lacking in earlier games.

Civilization 6, on the other hand, has opted for a more cautious approach. Making minor changes in key areas of gameplay in an attempt to refine what its predecessor set out to achieve. For the most part, this works extremely well. Small, subtle alterations such as replacing the worker unit with a ‘builder’ which is expended after three uses, forces you to more jealously guard your city developments. Roads are no longer built, but generated over time by trade caravans, meaning that in order to quickly travel between cities; you must first foster a trade relationship. The huge, bulky tech tree of previous games has been distilled down into two separate paths, one for physical advancements such as military and engineering technology and another for intellectual and political advancements. I could go on forever, listing every minor change but the best way to experience them is by actually playing the game and I’d ruin the pleasant surprises that might be found for long-standing fans of the series.

It isn’t all tiny tweaks and baby steps however and the biggest overhaul can be found in city development. Perhaps taking a few tips from 2014’s excellent ‘Endless Legend’, players must now assign hexes for things like natural wonders and the new buildable districts (which are often a prerequisite for essential buildings like libraries and temples.) Not only does this give the physical land around your cities a greater sense of purpose, but it also allows you to heavily customize your play-style. Want to go for a religious victory? Build holy sites in every city and get cranking out those shrines and temples. Want to push for scientific excellence? Assign campus hexes, build libraries and schools and try to attract great scientists (yes, they’re competed for in this game rather than simply accrued.) This is one of Civilization 6’s greatest advancements and you truly get the feeling that you’re being actively encouraged to tailor your civilization to your own desires as opposed to being forced down a certain path because of the resources around you.

Unfortunately, the number of civilizations to play as feels quite small, especially when compared to the previous title in the series which had forty three including all of the expansions. Civilization 6 currently has just eighteen (nineteen if you own the Aztecs DLC) and if anything, this is the one area of the game I wasn’t so keen on. Each leader has their own personality and style which seemed great at first but quickly made them predictable and in extreme cases, quite annoying. For example, Trajan, the leader of Rome would always start conflict with me, giving me the same warnings every game about my lack of expansion. After a while, whenever I saw him I just immediately started building up a big army for the inevitable armed conflict. I found there to be a similar issue with other leaders, who would generally repeat the same few phrases to me game after game. However, the truth is that I’m being ‘nitpicky’ here and with a few minor tweaks and perhaps the addition of a few more differing phrases, this is a minor issue that would easily disappear.

Visually, this is by far the best looking game in the series. The map itself is literally a piece of parchment with epic illustrations of sea monsters and galleons all over the areas which you have yet to discover. Once you actually discover an area and it reverts back into the fog of war, it becomes a hand-drawn map with pencilled in forests, mountain ranges and settlements which looks like it could have come straight out of Lord of the Rings, giving off a totally epic vibe that never stopped making me want to venture past the next horizon. The leaders themselves are excellently rendered in a somewhat pixar-esque cutesy style which lends a subtle sense of comedy to the often serious tone of the game. Other little touches such as detailed battle animations for units lend a real sense of fluidity and physicality to the otherwise board game vibe that these games tend to give off. 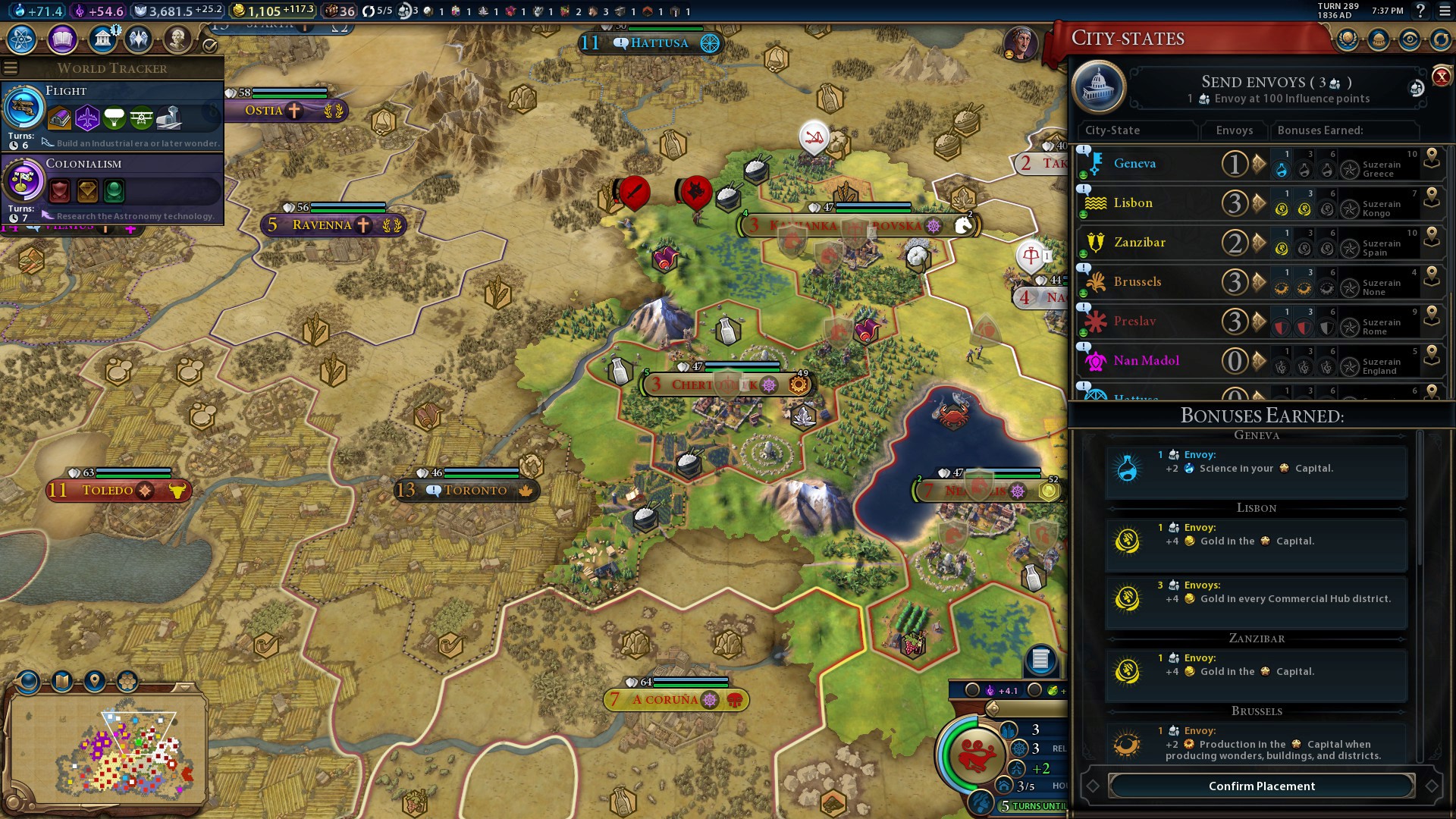 Finally, I'd be remiss if I didn't make mention of the music. The series has always been well know as having excellent composers and beautifully performed pieces of traditional music from around the World and Civilization 6 is no different. Playing as the English, I was treated to a haunting rendition of 'Scarborough Fair' played on a solo violin. As I progressed to the medieval age it transposed itself, adding flutes and drums. Every civilization has a similar transitional style of composition which serves to add an audible cue to your sense of progression. I'd argue that the music plays just as much of a role as the visuals and the tech tree in making it feel as though you're genuinely watching the birth and advancement of a culture.

Civilization 6 is as deep and engaging as ever in this latest incarnation of the best strategy series ever made. Graphically, it looks incredible and mechanically it is already superior to Civilization 5 which had multiple overhauling DLCs. I heartily recommend this game to anyone with even an avid interest in strategy sims and can’t wait to see what’s in store down the line in terms of DLC for what has to be a strong contender for PC game of the year.

Legendary designer Sid Meier is one of gaming’s earliest celebrities. It probably helps in that regard when you put your name on every game you make, but