No Man's Sky came very close to being an ideal game for me. Procedurally generated sandbox environments, in a colossal in-game world to explore, flying endlessly through space in your very own starship. It sounds great, but it falls short in a smidge too many things.

Since the game's release I've had many conversations with friends and co-workers about whether I'd recommend No Man's Sky to them. Yet, while my short answer is probably, I can't help but feel like I'm justifying certain aspects.

Let's start with purpose. The majority of these conversations have included the question "what is the point of No Man's Sky? What is the goal?". No Man's Sky is one of those rare handful of games where you find your own fun, there is no real purpose after what you get yourself from the game. The core element is exploration and survival. The game is very niche. It appeals to a very specific audience.

There is a tenuous story, if you'd like to call it that. The "quests" you encounter from local residents and mush-covered waypoints are multiple choice answers with no real consequence. The game has three major races that you converse with; the Gek - a diminutive trade race, the Vy'keen - a race of proud warriors, and the Korvax - a technological based race that's more interested in researching you than trading with you. With these creatures, you have a "standing" which reflects your relationship with each. Your standing changes by completing the missions I mentioned before and exploring ruins and dwellings, plus there is a chance of a reward of either a gun or an upgrade component.

However, as I said, it really comes down to a multiple choice system that starts and ends in the exact same location. I find the game as a whole very reminiscent of a "choose your own adventure" text-based game. Like Sorcery or the Fighting Fantasy books. Complete a choice to gain a reward that may or may not help you in the next choice.

The inventory system has a lot to be desired as well. Perhaps it's my anal nature, but I find the inventory screen cluttered and massively disorganised. For a game that has mining and trading as a major selling point, it's inventory could be vastly improved simply with categories. The game follows a grid-based "first slot available" system, meaning when you mine an element or loot a cargo crate, the contents will fill the first available slot free. Elements stack, but items do not. You can freely move your cargo around and reorganise, but that is somewhat undermined by the fact that upgrade modules take up a cargo slot AND become fixed in place. When you decide to upgrade, think wisely where you want to put it, because it is a permanent choice unless you disassemble it.

All the game needs to do to improve this is create tabs or auto-categories for certain pick-ups. A tab for elements, a tab for items and a tab for upgrades. Instead, there is only personal inventory and starship inventory. To me, that feels like a pre-alpha build inventory. So basically, it sucks.

The exploration is fine. It functions and it's definitely fun. But, like the inventory, could be so much more. Every planet is more or less the Australian outback in varying terrains. Everything is sparse and remote, sometimes outposts are within walking distance to each other and caves can sometimes lead somewhere. After so many hours, all planets begin to feel the same.

No two planets are the same, however more variations on planets would be nice. Not just jungle, ocean, snow, rock. If you count black holes as "time", it's the space sim equivalent of the Legend of Zelda formula. The game's whole USP is to travel from planet to planet and get out to walk around it. To see something that's so "not Earth" it's stunning.

After so long, my suspension of disbelief diminishes. I want more fascinating geography: Olympus Mons' like mountains that are awe inspiring on the horizon, weathers that you can physically see or feel that aren't just a piece of text in the bottom left, and I don't know about anyone else, but my in my game sessions, I've noticed a serious lack of rivers.

There's more though, I want massive civilisations. For a game that has three major races that use space freighters and star ships, I'd expected more Coruscant and Kuat like planets. Perhaps they exist and the universe is so vast, people have yet to find them, who knows? But even one city on some planets is better than a small cluster of waypoints and outposts.

The whole game is about exploring the depths of space, to see alien beings and experience what you otherwise couldn't experience. But when there are more notable things in our own real life Solar System, things like Olympus Mons on Mars, Jupiter's enormous hurricane, Saturn's rings and Pluto's heart. Where even Earth has places like Victoria Falls and the Burj Khalifa. You'd think some kind of apocalypse hit everyone in the game. Gek, Vy'keen and Korvax ruins look the same, and there's no variance in residential architecture on planets.

As I said, the game itself is incredibly niche. I do enjoy it, I find the game very cathartic. It's the type of game that I'd boot up if I had a few hours to relax, then just fly around, mine and explore for a little bit. But I can't sit myself down and dedicate time to playing it like I would many other games.

It's an average game, it does have spectaculer views and a functional survival mechanic. But if it's a space sim you're after, I'd recommend games like Elite: Dangerous or Rebel Galaxy. Instead, No Man's Sky is more comparable to Subnautica; a survival game that is also based more around exploration than actual survival. Sadly, though I'd recommend Subnautica before No Man's Sky too. While No Man's Sky is big and it is fun to fly around to pew pew other ships, Subnautica has more interesting environments and more to accomplish with gameplay. Plus, it's currently a third of the price of No Man's Sky.

No Man's Sky came very close to being an ideal game for me. Procedurally generated sandbox environments, in a colossal in-game world to explore, flying endlessl 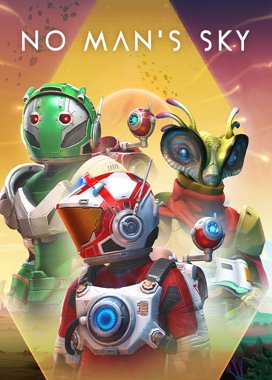 A cathartic experience with an enormous universe to explore.

No Man's Sky is fun and interesting if you're willing to drop the money and experience the procedural generation yourself, it does have some stunning views and you can get out of your ship to look around. However, there are probably more interesting games for cheaper that you can play for an equal amount of satisfaction.