Mass Effect Andromeda is one of the most highly anticipated games in recent years since its early reveal back in 2014, and with its galactic arrival finally here how does it stand up to our hopes and imagination of what Andromeda could bring?

Starting Mass Effect Andromeda you’re given the choice between playing as Scott or Sara Ryder which opens up the choice to customize them both, despite who you’ve chosen to play as. Character customization for Mass Effect Andromeda opens a lot of new weird and wonderful creations from players, with the introduction of Mass Effect Archives - a feature that allows you to share your character customization with other players, or even download other player’s creations.

Character customization is packed with options: everything from eye colour, hairstyles, skin tones, tattoos, makeup and more. You can also customize your twin Ryder to look just as wonderful as you.

The game starts with humans embarking on the Andromeda mission to find a new hospitable planet for humanity to inhabit. Pathfinders will lead the brightest and best in search of “Golden” planets. Each ship is sent carrying hundreds of thousands of people to different planets across the Andromeda galaxy to investigate their viability.

After 600 years of cryofreeze, Ryder awakens on aboard a ship orbiting the chosen Golden planet. Barely after being thawed from the cryofreeze Ryder becomes equipped with a SAM (Simulated Adaptive Matrix), a neural implant AI that acts as your assistant throughout the game. Things quickly start going south as the ship strikes a giant energy cloud damaging the ship. Luckily, Ryder’s dad Alec Ryder, is ready to be the hero. A former N7 commander and lead pathfinder, he calls for a small team to head down to the planet to investigate.

Ryder can engage in these conversations, though the old Paragon/Renegade dialogue choices are gone and instead replaced by a “tone wheel”. The tone wheel allows for much greater variety in conversations and prevents players focusing only on the outcome. While the outcomes are the same, the increased subtlety allows the player to focus on the journey as well as the destination. Decisions made using the tone wheel are accurately reflected upon in later story or side elements, they can also be reflected upon during exploration small talk between two of your companions.

Fans of the older series have expressed mixed feelings around this. While many understand, and welcome the change, drastically improving interactions and no longer defining your personality on blue or red text. Some fans would have liked a system to see how much of a goody two shoes or how much prat you’re being during your interactions throughout the game.

Of course, while we’re on the topic of dialogue there has been some questionable facial animations or lack of emotion in some characters faces. BioWare has noted that it has heard their fans disappointments in the facial animations and would most likely address this in a future patch. While it doesn’t exactly answer why this wasn’t picked up during internal QA process, we can take some comfort in knowing it will soon hopefully be addressed.

Looking beyond the dialogue options - we all know customizing your player’s skillset to best suit your tactical engagement has long been a choice that once made, you can’t go back on. However the starting choices are purely aesthetic and all choices remain open, allowing players to switch up and try new skills throughout the game. This means 50 plus hours into the game, you won’t regret the choices made in minute one, which is liberating.

Combat has been given a much-needed makeover to become much more fluid, Ryder is equipped with a jump jet which can be used to move around terrain but also dodge enemy fire and leap over obstacles. Outside of combat the jump jet simply gives Ryder a means to reach high ledges adding a vague sense of verticality to the exploration. This especially becomes useful when you’re in the deep mysterious Remnant vaults. Some encounters revert to the classic cover-shooting system of old, however the cover system is now automatic, approach some cover and the character automatically takes cover behind it.

After the rather dramatic ending the game’s first mission, the Human ark “Hyperion” moves onto the “Nexus”, the central hub for all arks of the Andromeda Initiative. This is based in the Andromeda Galaxy and is our home for the meantime, that is until we find viable planets that we can begin posting outposts on.

We’re immediately given a ship, the “Tempest”, to begin our pathfinder journey on finding new and viable planets for the Andromeda Initiative. From the Tempest, much like in the original trilogy, we can select which systems we want to go to and explore. While only a handful of planets are explorable on foot or via the nomad, there is much to see and do. All of these extra activities expand the overall story, extending the value of gameplay.

Mass Effect Andromeda extends into more than 50 hours worth of campaign and major side missions, giving plenty of time to explore and uncover the Andromeda Galaxies mysteries. One thing fans will notice about Andromeda, even though we’ve been shipped 2.5 million light years away from the Milky Way, is that it seems part of the plot is almost identical to the original trilogy. A long-dead civilization that’s left advanced technology lying around only for you to discover its mysteries.

We’re introduced to two new species in the Andromeda galaxy: the Kett who we immediately discover want to kill us and keep us away from any Remnant technology, and the Angaran who are on the brink of extinction due to a long-fought war with the Kett. So, when they suddenly receive an unexpected visit from new species from the Milky Way, it’s your job as a pathfinder to make first contact and play the diplomat.

Throughout Andromeda you have six companions with only one of them being from Andromeda. Your team also consists of an Asari, Krogan, Turian and Human. It seems fitting considering there are only two species in Andromeda and the Quarian Ark is delayed in getting to Andromeda (we’ll let you discover why on your own). Each companion receives their own dramatic introduction throughout the early gameplay. Our favourite is PeeBee, with her humour and all round bubbly, energetic attitude, you never quite know what’s going to come out of that mouth next.

There’s plenty of romance options for either gender, including same-sex and interspecies following Bioware’s tradition of open choices when it comes to bedfellows. Once you’ve gone out of your way to talk to them and run errands for them (which often involve blowing up robots or killing outlaws) to kindle the flames of your budding relationship, you’re treated to a full-on R-rated sex scene the likes of which the Mass Effect series has never seen before.

Mass Effect Andromeda occasionally confronts you with excellent morally grey situations where both options have compelling logic and terrible consequences. These decisions are right up there with the original trilogy when it comes to tough head-scratchers and having to deal with the outcome of your choice.

When you do land on a planet, the major worlds you can explore are huge and all visually distinct from each other. Each have their own hazards you must overcome to survive and eventually establish an outpost on to further expand the Nexus. But covering that ground is at least somewhat entertaining thanks to the Nomad, Andromeda’s version of the Mako landing vehicle. This bouncy car comes equipped with jump jets to launch over small obstacles, a gear shift to allow for climbs up extreme terrain making it more interesting than simply holding down the gas. However, it may equally frustrate some players with how slow it can go up some inclines.

Alien monoliths are dotted all over these worlds which must be activated to make the planet more hospitable to colonists, and whenever you see one you know there’s going to be some form of puzzle. Each monolith usually requires the completion of a puzzle, once completed this activates the monolith, completing three monoliths then provides the location of a vault. These puzzles don’t require any out of the box thinking but instead rely on existing logic puzzles like Sudoku and number sequences that can be drawn out on paper.

That said, I happened to enjoy the puzzles when confronted with them (one even had me stuck for a good half hour), but some fans will be looking for a much more challenging puzzle. The vault themselves also contain puzzles and secret side rooms to be explored and are packed with jumping puzzles to get around them.

Throughout Mass Effect Andromeda there are some surprises with how the story continues to playout, and after the final battle, which is appropriately climactic, you have the choice to return cleaning up the galaxy or switch over to the wave-based co-op multiplayer mode. This plays a lot like Mass Effect 3’s, with the new revamped combat system it speeds things up considerably, making those slow dull matches a lot more fun and occasionally unpredictable. You and three teammates can make much better use of the power combos to take down enemies and reach objectives quickly than the AI companions can.

As in the last game, this mode is more entertaining than you’d expect. Rewards are doled out in random card packs keeping things interesting by making you make the most of the gear you have available. While the game suffers from peer-to-peer connection leading to some laggy matches during its EA Access launch. I’ve enjoyed putting the combat skills I learned in single-player to good use.

Mass Effect Andromeda is one of the most highly anticipated games in recent years since its early reveal back in 2014, and with its galactic arrival finally her 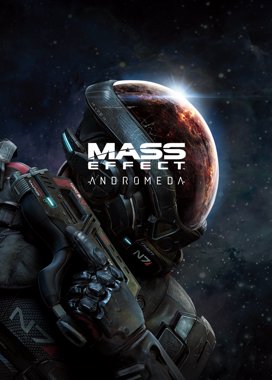 A great return of a beloved franchise.

Mass Effect: Andromeda is an expansive action role-playing game with some great moments that recaptures the highs of the original trilogy that came before it. Filled with energetic combat and fantastic sound effects contributed the thousands of talented voice actors.