I'm having a hard time writing this review. The Mafia series has always been close to my heart. While games like Grand Theft Auto, The Godfather (The Game), and Scarface played on the action and adventure aspects of open world RPG's set in gangster universes, the Mafia series always told a compelling story. The original Mafia told a sweeping story of 1930's mobster Tommy Angelo. Mafia II followed the revenge plot of Vito Scaletta in Empire Bay. In Mafia III, Lincoln Clay takes the city of New Bordeaux by storm, hell bent on taking down a man after a heist gone (sort of) wrong. After 6 years, how does Mafia III live up to the hype? Well...

Mafia III has issues. It's story is wonderful, told in a documentary style with flash backs and flash-forwards that keep you engaged. It's graphics are top-notch, with incredible lighting techniques and character models that look and feel natural, especially during the cutscenes. It's sound design is key to pulling you in and Hanger 13 have done an impeccable job there as well. Its a shame then, that the gameplay in between the story missions aren't as amazing as the rest of the title needs it to be.

Lincoln Clay is out for revenge. After returning home from Vietnam, he reunites with his friends in the black mob led by his surrogate father Sammy Robinson. Unknown to Lincoln, a turf war between Sammy's gang and a Haitian gang has put Sammy in debt with Sal Marcano, Don of the Marcano Crime Family. Lincoln meets with Sal, who tells him Sammy is no longer fit to run the black mob and offers the job to Lincoln. Lincoln refuses and as an offer to pay back the debt Sammy has accrued, agrees to take part in a robbery of the Louisiana Federal Reserve.

Sounds great, right? IT IS! The story is the standout thing with Mafia III. The documentary style storytelling is different and engaging, it makes you want to play more to see these scenes alone,

The characters you meet are incredible. From the Haitian gang leader Cassandra, to the Irish Thomas Burke, and our old friend Vito Scaletta, the characters and story never let you go. You actually care about these characters and the arc they play. You recruit each of the three mentioned above as an underboss to you, taking over sections of the city piece by piece. Its here that the gameplay starts to waver. You see, in order to regain control of these areas, Lincoln has to complete various missions. These range from taking out a moonshine distillery, to shooting up a butchery and either killing the man who runs it, or convincing him that he works for you and your underbosses now. This is a nice touch and the first time you do these missions, you feel incredible, it's like you have accomplished something. And then... you drive across town and do it again, and again, and again.

In every city section, you come across the same versions of the same missions you just completed to get to ONE story mission per section of city. Its sad that so little attention was paid to the varying of those missions as its how you spend the majority of your time in game. More attention should have been paid to making the bulk of your gameplay more enjoyable. There are paintings and Playboy magazines to collect around the city, but they don't really seem to have any purpose other than achievement hunting. It seems Ubisoft must have had a hand in designing the game, as the familiar Assassin's Creed watch-tower mechanic makes an appearance here as Wire Tap Modules. These allow you to see different things in the city by collecting various fuses and placing them on wire-boxes placed around the city. Its a long, boring process that, again, doesn't have any real pay off. There is a difference between filling a game with content and filling a game with meaningful content. It seems as if Hanger 13 forgot that somewhere along the way.

Movement, gunplay, and driving are, thankfully, a major improvement over Mafia II. The guns feel natural and aiming is a breeze (you also have the option to turn on Aim Assist in three different settings; Low, Medium, High). Driving is much improved this time around as well with cars handling smoother and easier to maintain control of all while having each vehicle feel a little different. Hand to hand combat and stealth mechanics have been given an upgrade as well. It was wonderful and puzzling to see these little things getting so much attention, with so little focus on the repetitive gameplay sections in between story missions.

The game looks stunning at times, with the cutscenes getting special mention here as they are incredible. They really push the story farther and are part of the reason you want to keep playing the game. The lighting effects alone deserve praise. I was standing in some building after talking to Vito and looked out the windows and saw that the sun was setting. Looking around me, I noticed that the light was shining through the windows, causing shadows and other effects. THAT alone was incredible and there were so many more moments like that. Staring out over the city at times in utter awe of what they were able to accomplish.

The music and soundtrack are so well done I actually went and searched out the soundtrack and various songs heard in game on iTunes and Spotify. I wanted to hear these songs again outside of the game, which is something I don't do often. They took great care picking a selection of songs that all blend into the atmosphere of the game very well.

I'm having a hard time writing this review. The Mafia series has always been close to my heart. While games like Grand Theft Auto, The Godfather (The Game 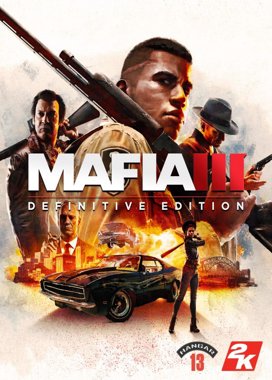 A solid, yet flawed return to the series

Overall, Mafia III is good. It could have been great, but an archaic paint-by-numbers mission system in between its incredible story missions hold it back. Mafia III has one of my favorite video game stories so far this year, but I can't help but feel like a little more forethought into the missions would have put this game over the top.