Life is Feudal: Forest Village Should Be Named Life is Brutal

I wanted to get into the simulation spirit with Life is Feudal: Forest Village since I was the demi-god of a handful of people that I instantly cherished. You start the basic map with a handful of villagers and a few shacks in the budding months of spring, when it's easy to grow crops and the harvest is bountiful. Food stores become the least of problems, however, as you progress through several months to hit winter. That's when the brutal aspect of the game rears it's head. The previous months are primarily spent preparing for winter, as crops and clothes don't often survive harsh winds and extreme low temperatures. Like in real life.

But let's back up. Life is Feudal: Forest Village, coming straight out of Bitbox, is the Sim City take on a 1600s-ish village where you start from next to nothing to see your village grow slowly, birth by birth. I picked the "easy" setting as I normally do since I honestly don't know how to play games properly. It didn't matter, however, as by the second winter I realized I had completely run out of wood and my clothes were torn to pieces as the snow knocked off each of my villagers one by one. It's one of the few games I frustratingly restart just to get a proper cadence of things only to find out my cadence of building things and focusing resources in a certain area of building render my village empty in a matter of months.

It's a harsh game because you're required to keep track of numbers that can some times get out of hand easily. One winter with sparse clothing and no weaver to make clothes leaves your villagers unable to protect their selves. Another winter with all your trees consumed and no forester to plant more leaves your villagers cold and likely left to die. It's a numbers balance game where if you neglect one aspect of the great balance, all hell breaks loose and you're left losing hair over a restart. It might even be a matter of luck if you survive another winter, but luck strokes are few and far between. I couldn't survive past 10 villagers until I realized they started dropping off quickly (having the game on the fastest speed doesn't help either, but I have a need for speed in sim games). The game's focus is slightly different than what you'd expect from a Sim City in that your villagers are responsible for everything instead of buildings. You "assign" roles to villagers ie you assign builders to make buildings, fishermen to catch fish, etc. So essentially any village function can be sped up or slowed down just by the villagers you assign to it. Unfortunately, that's what makes the game just as difficult as unique.

There are other frustrating moments--trees often remain on the map, even though your villagers have harvested the wood, so it's a little deceptive when you're out of wood and you expect some from the resource gatherers. What's nice is you can assume the persona of any villager and micromanage resource distribution, but hopefully success in the game--whatever that might mean to the player--doesn't hinge on that extreme micro aspect. It's no Sim City, but I'd like to see some kind of pedigree going beyond 3 children. Plus, I'd like to be able to zoom out on the entire map, but sadly the camera is locked to a certain distance. It feels like more of a software limitation than a creative limitation.

Ultimately, this is a sim game that hinges on one majorly different mechanic--controlling the village via villagers (see what I did there?) instead of a building's function. It's a matter of luck trying to find the proper balance between building, resource gathering, and what to build. Ten restarts might be a good average to find that proper balance, but the music starts to get stale and you care less about villager lives than trying something else out before long.

I wanted to get into the simulation spirit with Life is Feudal: Forest Village since I was the demi-god of a handful of people that I instantly cherished. You s 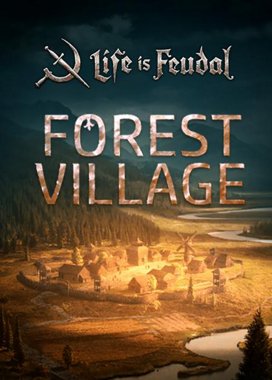 A Difficult Sim of Timing

Timing is everything in Life is Feudal: Forest Village, and if your cadence for building things, resource gathering, specific ability generation, and micromanagement is off, you'll find your entire village at the hands of a fateful winter. It's a rough sim that takes time practicing getting used to, but that time spent is often the time it takes to lose interest in the game.