Whenever any gamer sees a film title on the cartridge, cassette, floppy disk or CD most will shudder and just think, “Oh it’s just a substandard, sloppy bit of software rushed out to promote the film”. Thankfully Goldeneye on the Nintendo 64 was a marvellous exception to this trend which was actually released a year and a half after the film. This was due to at least two unofficial postponements which frankly, we’re all extremely grateful to Nintendo for taking their time in order to produce great quality software.

We all knew that something special was inbound when you saw the metallic rotating Nintendo logo and then the trademark Bond intro that we all know and love, along with showing off the models of the cast first up. Rare had got me from the rotating logo.

So why is this such a gem of a game? Well, who doesn’t want to be Bond for one thing and of course the girls, I mean, gadgets that come with the infamous 007 title. This game features the gadgets, guns and first-person action; immersing the player in spy-styled tactics, covert operations which forces the players to plan out the best course of action rather than just blasting your way through.

The 18 missions follow the plot of the film very closely, however that does not make this first-person shooter quite as linear as Rare have managed to meticulously add more action than the cinematic counterpart. The first level is of course at the dam (aptly named “Dam”) and the player starts off with Bond’s trademark Walther PPK. Taking out guards gives you access to more artillery that the game has to offer for which throughout the missions it’s sometimes wise to change it up using what’s best for certain scenarios. For one mission it might be wiser to use a sniper rifle and pick off the unaware guards from a safe distance, another mission you can easily dispose of the enemy maniacally wielding a gun in each hand, making the combat extremely satisfying. Three game modes are available to try your spy luck; being Agent (Easy) Secret Agent (Medium) and 00 Agent (Hard) Once you have finished the game in all these modes, you then unlock 007 Mode which enables you to manipulate the enemy’s health, damage they give, accuracy and how quickly they react.

“Oh grow up 007”. No Q I will not, I have gadgets! But what Bond style spy toys do we have to play with? Probably my personal favourite is the laser watch and the magnetic attract watch because let’s face it, lasers and magnets are cool. You also have modems, data thieves and key analysers in which all these fun gadgets can play an important part to get you through certain areas of a mission, enabling the player to make their way through the multi-objective missions. The enemy soldiers are pretty intelligent and actually react to the sound gunfire swiftly, meaning that being stealthy is highly recommended. They also vary in how they tackle a gunfire confrontation should your cover be blown by a security camera or they’re alerted. Some will roll along the ground while continuing to shoot, other will crouch or just come running towards you guns blazing. Not only that, they react to where they’re hit. If like me your shot isn’t quite on target when aiming for a deadly headshot, you may just be shooting at their hat which amusingly drops to the ground. Obviously the head shot and they go down like a sack of potatoes. But if you’re feeling particularly sadistic you can always inflict harm to their limbs several times before their injuries prove too fatal.

The movement is a joy to handle with the controller. Left and right C buttons for strafing, while the top and bottom enable full Z-axis movement, making for smooth movement shooting up or down. This gives the player to move Bond across the screen naturally using the analogue stick. A novelty addition to the game is the Rumble Pak compatibility. This little feature isn’t overused which is a nice touch to an already immersive game.

If you fancy a bit of a change and think you can handle even more fun, Rare have included a highly addictive multiplayer option for up to four players. A choice of five scenarios from deathmatch to modes inspired by previous Bond films such as ‘You only live twice’, where the players have only two lives; ‘The Man With The Golden Gun’, which means that one hit from the notorious weapon is instant death and finally ‘The Living Daylights’ which is basically a flag-tag style mode. Once you’ve decided on the game mode, players are able to select a character from an impressive list of individuals not only from the film itself, but also a few of the other well-known villains from the franchise such as Jaws and Oddjob.

Whenever any gamer sees a film title on the cartridge, cassette, floppy disk or CD most will shudder and just think, “Oh it’s just a substandard, sloppy bit of software rushed out to promote the f 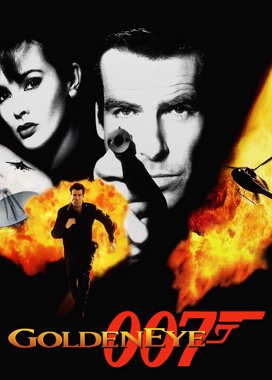 What comes as a nice surprise and sticks out like a sore thumb is the game's depth, atmosphere and detail. Well animated characters and intuitive AI, realistic settings and interactive backgrounds sound effects are crisp along with music based on the movie. Ricocheting bullets, the clinky-clonky noise of footsteps just gives this first-person game that feeling of elegance and there is enough content even on 'Agent' difficulty to keep players occupied for a decent amount of time. Overall the game is executed marvelously both single player and multiplayer, it is by far one of the best shooters to grace the generation even to this day leaving players shaken and most definitely stirred.