When Far Cry 5 was unveiled in 2017, the initial reaction by most people was “Okay….and?”. Ubisoft had spent the better part of the past few years essentially boring people to death with the same game mechanics across every one of their major titles. This Ubisoft game fatigue is what led the Assassin’s Creed franchise to take a year off to redevelop itself and for the most part, that paid off well with Assassin’s Creed: Origins scoring fairly well across the board late last year. Far Cry 5 promised to reinvent the Far Cry series much like Assassin’s Creed did last fall, taking us from an exotic locale to a fictional county in Montana, where a passionate cult, The Eden’s Gate Project has taken rule over Hope County. Does Far Cry 5 reinvent the wheel and soar smoothly across the landscape or does it crash and burn like someone trying to drive a vehicle with spiked tired? Lets find out.

Let me get this out of the way right now; Far Cry 5 is unreasonably pretty. There are moments that I sat there, staring at my screen trying to take in everything around my character. Its immersive, its gorgeous, its stupidly well done. I’ve never seen a more realistic title when it comes to not only how everything looks, but how it feels when you’re moving about it. The world just feels alive, and thats something many games try to accomplish and fall well short, so what Ubisoft have done here is incredible. The attention to detail in almost every aspect blew my mind. You can talk to every character and most will give you information about the world around you from where to find the next prepper stash to tips about hitting the nearest outpost. There is always something around the corner or off in the distance on the horizon to explore and its obvious thats where Ubisoft put a lot of thought and effort into making sure players engaged with, especially with the removal of the mini map.

Gone are the radio towers that unlock new information about the world around you. Gone are the seemingly endless needs to craft new gear and weapon attachments, replaced instead by the need to explore the world around you organically. Inspired by titles like The Legend of Zelda: Breath of the Wild, the adventure plays out best when you make the choice about where you go and what you do, allowing you to experience the game at your own pace. Fellow staff member SweptSquash played through a bit of the campaign solo before we hopped into co-op together, and it amazed me how different our experiences were, yet we both ended up at the same place before starting our journey together.

The story is well done overall. The motivations of each major player in the game are clear. Your character, a rookie deputy of the Hope County Sheriffs Department, is all about bringing justice to the group of cultists that have taken over the county. The Seed family (Joseph, Jacob, John, and Faith) along with each baddies respective minions all feel unique and yet, all tie into this fight for their common goal; to save their followers from The Collapse, a seemingly insane sounding doomsday prophecy that Joseph believes God granted him knowledge of. To say much more would give away too much of the story for my comfort, but as the deputy, you fight through three main bad-guy areas (John, Jacob, and Faith) doing various story based missions or other activities (clearing outposts, rescuing civilians, blowing up trucks, and hunting down various animals all while gaining followers of your own that will fight for you.

This is a new mechanic in the Far Cry series and while the idea of guns for hire was awesome on paper, in practice, the AI was a bit…wonky. They often don’t target what you’d want them to until you give them the order to do it. They also often would smack the idea of a sneak attack down by running in guns blazing screaming some random obscenity. It was a weird experience and could never take the place of a full on co-op partner player. I get what Ubisoft was trying to do here, but at least make the AI a bit more competent next time around, mmkay?

The core gameplay of the Far Cry series remains unchanged, you play from a first person perspective, running around causing all kinds of guns blazing mayhem to achieve your goal. Where Far Cry 5 differs from past series titles is in how you achieve those goals. As stated previously, gone is the Mini-Map, gone are the radio towers to reveal more of the map around you. Far Cry 5 is all about exploration and how you react to the world around you. It really becomes your story inside of the overall story that Ubisoft is trying to tell and the fact that both of them don’t get muddied when they cross paths is an incredible feat. The gun play remains as exciting as ever, with satisfying gun play across the entire arsenal available to you. The ability to walk into any area and just start shooting and blowing everything in sight up is absolutely freeing and creates an almost Just Cause series vibe.

The music is another highlight across the board. The licensed tracks they pulled for the radio stations are a great touch, but where the music really shines is in the original compositions. From the menu to the credits the original music just flows so well. When you’re hunting, its quiet and soft, then when you shoot at a deer or bear or wolf it picks up the pace rapidly and creates this exhilarating feeling. The same thing happens during gun fights and it just makes the entire experience even better. The Far Cry 5 soundtrack is one of the few I’ve added to my out of game music playlist, and I suspect it will stay there for quite some time.

The co-op experience, however, left me a touch underwhelmed. While it was awesome to have a friend or two in game with me to experience the story, with us trading commentary back and forth throughout, its a shame that there were so many co-op related bugs. From characters respawning or de-spawning at random to vehicles spinning rapidly and randomly out of control for no reason, it was an adventure in and of itself trying to coordinate at times. The other weird thing for me, especially with the invention of cloud saves becoming more and more prevalent, is that only the story progress of the host character is saved. Everyone else reverts back to their save, but keeps all of their unlocks, money, and experience perk points. Its just a little odd to me. The Far Cry Arcade has also been reworked here, and while its fun to mess around in PVP based team deathmatch maps, the real fun will be once this game grows a bit more and the community has their chance to upload more maps to the system.

When Far Cry 5 was unveiled in 2017, the initial reaction by most people was “Okay….and?”. Ubisoft had spent the better part of the past few 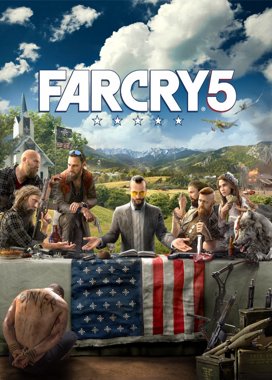 Far Cry 5 blends the new and familiar in an almost seamless fashion.

Overall, Far Cry 5 dazzles in all of the right places. The story keeps you engaged and makes you think. The gunplay is as fantastic as ever. The emphasis on exploration and telling your own version of the story within the overall story is a welcome change. It really feels as if Ubisoft have finally started to come into their own, making each game better than the last. Here's hoping that they've finally learned from their past mistakes and are onto bigger and better things. The games industry as a whole could use some good news for a change.