The Broken Sword series has always scratched that Indiana Jones itch for me. It’s an itch that I assume most of you adventure-seeking sorts have. The desire to delve deep into medieval conspiracies, to hunt forgotten treasures which contain the subtle hint of supernatural power, all the while racing against some nefarious foe who would use that same power for his own evil gains. Apparently they’ve scratched that itch for a lot of people too because the first two games in the Broken Sword series are considered classics of the point-and-click genre, even making the rare jump onto home consoles, despite the lack of a mouse and keyboard. So here we are again, with the launch of 2014’s ‘Broken Sword 5: the Serpent’s Curse’ now on Xbox One and PlayStation 4, we once again get to follow the exploits of George Stobart and Nico Collard as they travel around the World attempting to solve their latest mystery.

The plot unfolds with the theft of a painting of unknown origin from a small art gallery in Paris. The gallery owner is shot dead as the burglar attempts to flee and George just happens to work for the company who insured the gallery. He immediately suspects it was an inside job and thus begins another globetrotting adventure. The game’s initial PC release came in the form of two separate episodes which split the game into two distinct halves. The first is quite slow and at times, a bit of a grind to get through, but push through to the second act and you’ll be treated to an adventure that is truly worthy of the Broken Sword name. It would be impossible to say much more without dropping spoilers, but I can tell you that the writers did away with the Templar conspiracy theme from the early games, stating that it has become something of a cliché since the popularity of the ‘Da Vinci Code’. I found this very refreshing while still familiar, as the medieval/religious themes do remain, just with a new gloss of paint on them.

Point-and-clicks of the past have been accused of forcing players to hunt for pixels and it’s refreshing to see that Broken Sword 5 has generally managed to avoid such clichés. I played it on the PS4 and I found the environments to be quite clearly navigable, with on-screen prompts whenever my cursor was over an item which could be interacted with. Furthermore, the game gets a great deal of use out of the unique features on the PS4 controller. The track-pad can be used as a… well… track pad, allowing you to move the cursor with your finger and whenever you make a phone call in the game, something which happens quite often, the voice of the person you’re calling comes out of the speaker in the controller, meaning that you have to hold it to your ear like a phone in order to hear it. This might seem a little gimmicky and in a sense it is, but it really does add to the immersion and I found it to be a great use of the hardware.

There are puzzles galore to be solved in Broken Sword 5 and although veteran puzzlers will find the first half of the game a little easy, as you progress into the 2nd you’ll be presented with some of the most difficult the series has ever produced. One particular puzzle towards the end involved the translation of a dead language which took me several hours to figure out. This ramp up in difficulty was jarring at first and it really serves to illustrate the point that this is truly a game of two halves, with the first being slow and easy and the 2nd being very much a classic point-and-click experience. Unfortunately, I found the ending to be somewhat anti-climactic, with no real sense of having defeated or overcome anything, but it was nevertheless an enjoyable romp around the world up until that point.

Graphically the game is, you guessed it, split down the middle once again. The backgrounds and environments are as gorgeous as you’d expect from the now veteran studio, however the characters consist of 3D-rendered models which have been captured and turned into 2D sprites. While I understand that this is most likely a decision born out of budgetary constraints, it had a noticeable effect on the quality and ultimately the immersion of the game. The 3D look did not synergise well with the picturesque backdrops and locales and the animations were often clumsy and ugly. It was by far my biggest issue with Broken Sword 5 and held back what would have otherwise been a visually exquisite experience.

The Broken Sword series has always scratched that Indiana Jones itch for me. It’s an itch that I assume most of you adventure-seeking sorts have. The desi 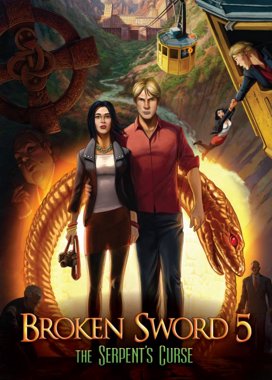 Push through the first half to enjoy a great second half.

‘Broken Sword 5: The Serpent’s Curse’ is not quite as good as the first two games in the series, but then very few games are and it is made all the more tragic by the fact that without its first half, it perhaps could have been. But fans of the series and/or genre will find a game which is full of witty dialogue, familiar characters and challenging new puzzles.
Overall
7.6
Story
8.5
Gameplay
6.5
Graphics
7.7