Bear With Me Review

In this point-and-click adventure from Exordium Games, 10-year-old Amber and her cuddly private investigator friend Ted E. Bear go in search of her missing brother, trawling through the outer limits of Paper City as it’s ravaged by a new menace known only as ‘The Red Man.’

What really sets Bear With Me apart from other recent adventure games is the fine tightrope it walks between two genres that have no business being paired with one another. The plot is the bizarre love-child of Toy Story and Sin City, complete with shady, gangster stuffed bunnies and the brutal murder of cuddly toys, their stuffing and thread splurged all over the floor. The setting is similarly dualistic and the vast majority of this first episode takes place on the second floor of Amber’s home. The visuals present it as a normal, family home. But for Amber and Mr Bear, this is the outer limits of Paper City, a huge metropolis that exists in the attic. The fact that Amber and Mr Bear rarely break character gives you the delightful feeling of being in on the fantasy and the eeriness of the empty house (her parents and brother are nowhere to be seen) seems to fit perfectly with the idea of the dark outer limits of a crime-ridden city at night. Despite a few cheesy lines and one questionable moment that completely breaks the fourth wall, the dialogue is pretty solid. The interactions between Mr Bear as the grizzled, clichéd PI and the enthusiastic and adorable Amber are a particular highlight and their voice acting really goes to town on what you expect from a detective and a child, playing on every film noir cliché and milking them for both dramatic effect and comedic parody. This creates a highly entertaining juxtaposition as Mr Bear dismisses Amber as ‘doll face’ and she retorts by accusing him of being a washed-up drunk. When they work as a pair to speak with the rest of the cast you can really see some potential forming for what is being billed as an episodic adventure series.

The visuals are fairly well done. The noir style lends itself nicely to the setting of a darkened house at night, occasionally giving way to the odd burst of colour and allowing it to really light up an area. This is unfortunately brought down by a distinct lack of animation on Amber. Her interactions with objects in the game World are severely lacking and this often jerked me out of the story as a result. A few more cycles of animation or the addition of more items in her hands would have made a huge difference in the visual quality of the experience. Bear With Me often felt a little buggy at times as well, with characters struggling to interact with doors or items. The puzzles were also very easy, in fact I’d go so far as to say they were non-existent outside of the tired, old combining of inventory items to make new ones, which we’ve been seeing for as long as adventure games have been around. The short running time (around an hour) could have been padded out nicely with the addition of just one or two small puzzles. 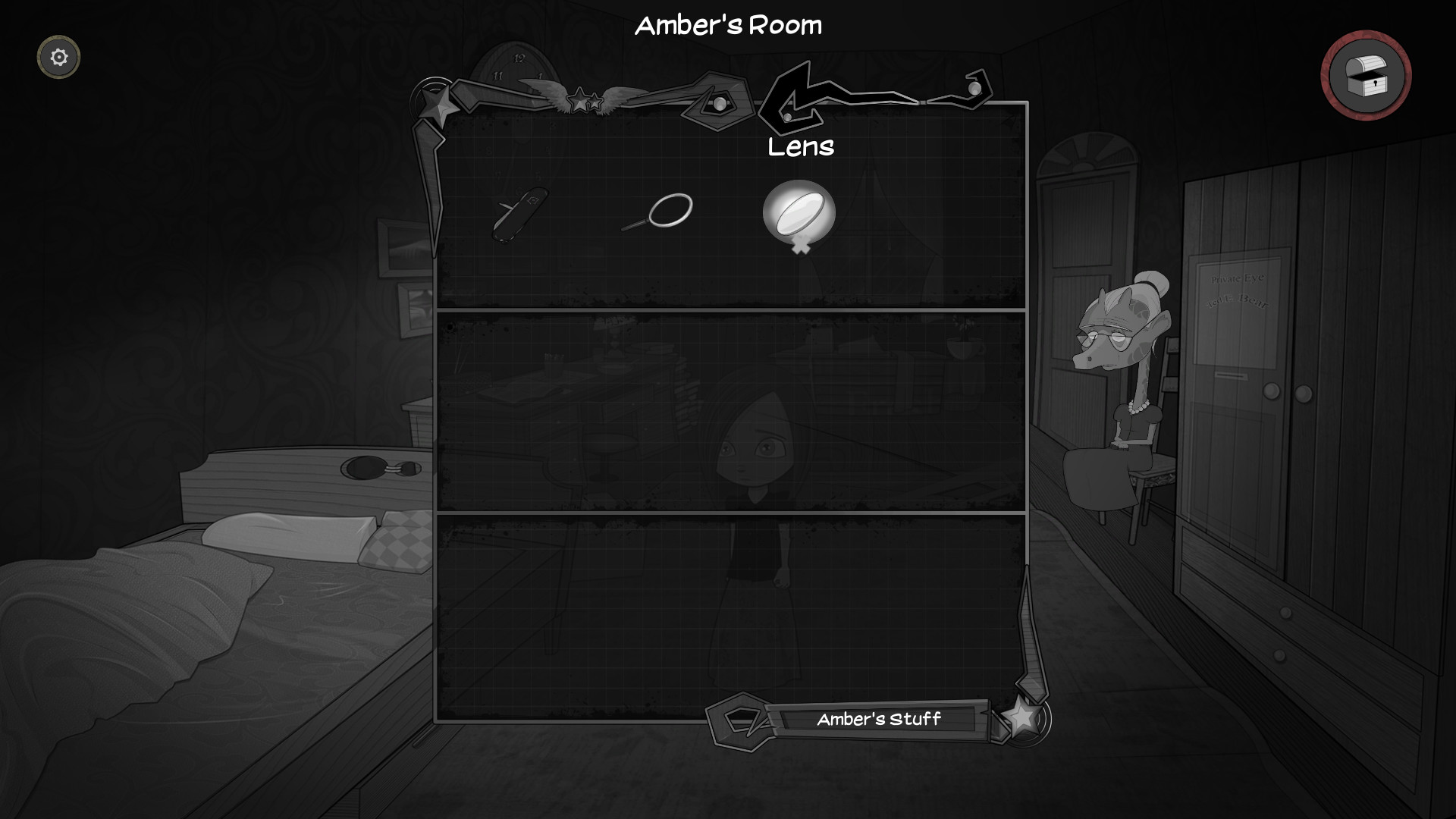 Still, this wasn’t enough to spoil the experience as a whole and when the smooth jazz oozes out of your speakers and pours over a pair of wise-cracking bunny gangsters getting shaken down by a whiskey-soaked Teddy Bear, you know you’re experiencing a truly original piece of crime fiction. I’m genuinely looking forward to seeing what’s in store for Amber and Mr Ted in the future.

In this point-and-click adventure from Exordium Games, 10-year-old Amber and her cuddly private investigator friend Ted E. Bear go in search of her missing brot