"On my one playthrough of the game, all my villagers died aside from two men sharing the one house. The lovely gay couple maintained the village until they both died of old age."

I was sat at my desk, browsing through steam, trying to decide what game I'd like to talk about and present to you guys. Then it dawned on me that we haven't spoken about Banished. And that is a damn shame, so let's retro review all up in here!

Banished is a city-building strategy game released back in 2014, akin to Sin City and modern iterations of the Settlers games. However, as opposed to its Sim City cousin, Banished focuses on the survival of your villagers against weather, illness and starvation instead of rapid expansion. The game sounds like nothing new, and it is a safe game. However, it's niche charm comes from its challenge curve.

The most notable mechanic of the game is the weather. As time goes by, Banished flicks through the varying seasons of the year. So, because of this, you have to carefully manage resources of stone, wood and food to make sure you survive. As soon as you hit your first Winter, your villagers will start dropping like flies.

On my one playthrough of the game, I had a very lovely elderly couple living in the house, a man of 83 years and a woman of 80 years. They lived a happy life until the end, meanwhile the other 30 odd villagers or differing ages died one by one from either starvation or the cold of winter. In another playthrough, all my villagers died aside from two men sharing the one house. The lovely gay couple maintained the village until they both died of old age.

It isn't impossible as long as you prioritise certain necessary things, and if all fails, it is possible to regain a population providing at least one man and woman are alive to... well... repopulate in the most biblical way a game allows.

Implicated incest aside, it is a fun game. My best playthrough to date left me with a sprawling city full of pubs and churches and hospitals, with a 5 star happiness and health rating, filled with a comfortable population of 128 adults and 30 children. By prioritising farming, fishing and firewood from the get go, I managed to survive the initial painful winters.

In my opinion, the game's time scale is very well balanced. The "years" of the village are set to Seasons, whereas the age of the villagers are set to playtime. So a 30 year old may have only experienced two or so Winters, give or take. The game's art style is charming, the buildings are humble and village like yet don't look out of place when you expand into a large town. You can pave the village and create orchards and wells. The snow looks just as pretty as when the environment is sunny.

The HUD is very tidy and easily my favourite part of the game. Almost every window that shows information, whether it's the map or village statistics or occupation management, can be moved anywhere around the screen and minimized. It makes the screen less cluttered and allows you to see information when you need it. The only menu that can't be minimized or moved is the construction menu but it is kept tidily in the bottom right.

Arguably the best thing about Banished is how Shining Rock implemented mod support a few months after release. The game actively encourages mods by the community, which not nearly enough games do these days. When you browse the Steam Workshop you can see how creative people have been, and I have only come across a few that don't work. Banished knows that sometimes mods won't work and Shining Rock have kindly included a mod management menu in the main title screen.

I thoroughly recommend Banished. As it stands, I believe it's the best town-game currently on the market. It's difficulty is challenging yet not impossible, it's mod support allow for a wealth of customisation and the nature of the game is charming and oddly addictive. If and when all your villagers die - the slow, consequential nature of it doesn't make you rage, it makes you chuckle say "god dammit" and start a new one. For a £15.00 game, it's not only justified in price, but it's fun and challenging. Get it, become the village master you were meant to be.

"On my one playthrough of the game, all my villagers died aside from two men sharing the one house. The lovely gay couple maintained the village until they both 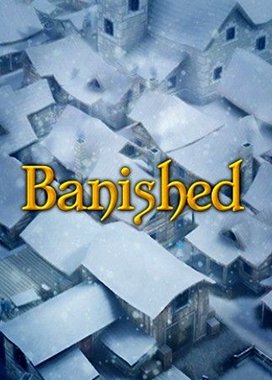 If you want a game where you can chill out, relax and just mindlessly build and expand a village, but still have enough challenge to engage and make you focus, look no further than Banished. Just remember Winter is coming.