The short answer is this; Assassin’s Creed Origins succeeds at most of what it sets out to do. It tells an engaging story, although it takes awhile for it to pick up and for you to understand what's going on. It freshens up both of the tired combat and exploration systems of past titles, and it finds new ways to engage you as a player to keep you wanting to come back. Origins is the first time in years that I’ve lost track of real world time playing an Assassin’s Creed title. My first night in, I was so enthralled with the world and exploring everything around me, that I looked up from my Bayek fueled stupor and realized it was 2 AM. I had lost 6 hours playing this game. What a wonderful feeling to have! Although, I regretted it the next morning at work…

The combat system has been completely overhauled. Instead of button mashing X or Y on a controller until you win the engagement, you now have two attack modes, light and heavy. These attack modes are then varied across a host of weapon types like single handed swords, polearms, two handed axes, and more. There is so much to explore weapon wise that I found myself engrossed in picking up every weapon I could get my hands on just to see how it felt when I swung it at something. You also now have ranged attack in the form of a bow and arrow that actually feels like you’re shooting the arrow from the bow. The first time I hit an enemy with an arrow and it killed them, I was shocked at how satisfying it felt. Watching them *THUD* backwards into the wall behind them and crumple over, not knowing what hit them, was a feeling I was certain would get old over time, but it never did. This is due in part to the weapons system, giving you a variety of bow types to choose from besides your normal weapon types. Hunter bows are great for hunting animals, with their quick shot mechanic to down your enemy as fast as possible. Predator bows are more like sniper rifles, you have to line up your shot perfectly, but once you let go, it deals massive damage to your target.

Exploration has also finally been reworked. Gone are the days of heading to all of the synchronization towers so you can see the full map in front of you. Gone are the seemingly endless, mindless side missions that had you attempting to collect various things (sea shanties, feathers, etc). It's all been replaced with a beautiful open world that is truly yours to explore as you wish. While there are still synchronization points in areas, they serve to alert you to more optional things this time around and they also serve as the game's fast travel system. Taking queues from games like The Witcher 3 and The Legend of Zelda: Breath of the Wild, you really are free to explore where you want, when you want. You might get one shot by an enemy who is 30 levels above you, but hey, that's your choice! It gave me a great sense of wonder to see a pyramid off in the distance and a great feeling of satisfaction when I spent half an hour trekking out there to find that I could actually explore the pyramid inside and out! Origin’s world is massive and one you’ll want to spend hours in just traveling around to find every little thing possible. Bayek also has access to his eagle, Senu, who can scout out areas for you so you can plan your method of attack accordingly. Think of the camera system from the Far Cry series and you’re not far off of the capabilities here. Ubisoft have a tendency to borrow things from other titles they produce and while most of the time it feels tired, this is another welcome change to the franchise. Lets just hope they don’t try to shoe horn it in everywhere now that they see it works so well in Origins.

Assassin’s Creed: Origins tells the story of Bayek, the Medjay of Siwa. You travel throughout Egypt to enact revenge on some big baddies who have done you and your city wrong. That's pretty much all I can confidently say without spoiling some pretty large reveals but I will also say that the story kind of plays second fiddle to everything else in the game. This is not a bad thing, however as there is so much content here that the story missions just feel like something you CAN do rather than something you HAVE to do until you hit a certain point in the game. Its freeing and refreshing and I hope that they are able to find a balance between exploration and story in the coming titles.

The game looks stunning. There is no other way to describe how well this game has been done visually. There are details in everything and while I did notice a few odd textures and pop in here and there, I’ve attributed that to my specific rig and not the game itself. The only thing that kind of took me out of the experience was the NPC’s you interact with. At times, they look almost lifeless. It's basically “The Bethesda Problem” over again, and I hoped that we had moved beyond that problem as an industry by now. However, given that this is Ubisoft's first foray into a true non scripted open world, I can almost give them a pass this time. Almost.

The music and sound is also another area where I was blown away. Usually in Assassin’s Creed titles, I turn the music down a few notches because it's the same style of music or same few bars over again until you want to shove a pencil in your ear to make the music stop. This time around, it seems as if attention was  paid to how the music affects the world around you and it's a welcome change. Sound design is so well done I wouldn’t be surprised if the game wins some awards for it at some point later this year. The weapons all sound realistic and the way the sound is layered is so well done at times it's scary how accurate it is.

All of this praise doesn’t come without a bit of criticism though, as Assassin’s Creed: Origins does suffer from the typical Ubisoft problems. There are some bugs here and there, especially visual bugs that annoyed the hell out of me and there are also some weird audio/video sync issues at times. A game restart seemed to fix the problem, but they still shouldn’t be there for a AAA title in 2017. The only other real issue that I have with the game is how it starts. The game begins in the middle of a conflict that we as a player know nothing about and they don’t do a good job of setting up the “who, how, and why” portions of the story until you’re already well into it. They try to, but fall ultimately fall short of the overall goal. Perhaps its something that was planned, but the beginning could have done with a cutscene or even some text explaining what exactly was going on that caused us to be where we were. Throwing us into a story is fine if you’re an established character, but it took me awhile to warm up to Bayek and his plight because of this mechanic.

Finally, it wouldn't be an Assassin's Creed: Origins review unless we mentioned DRM. The game uses two forms of DRM to it's ultimate detriment. These cause inflated loading times, a lot of dropped frames during cutscenes (whatever Ubisoft may say, Denuvo has been proven to do this in the past repeatedly) and an excessive load on your CPU. Considering the game was cracked within days of it's release, there's really no excuse for punishing paying customers for an ineffectual stab at preventing piracy.

The Assassin’s Creed franchise needs no introduction. The series has spawned multiple titles across every platform throughout its existence. Some good, so 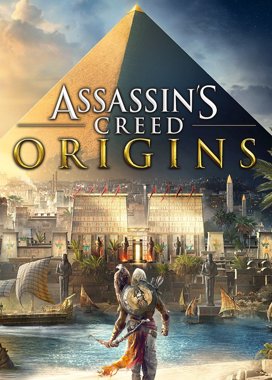 Despite its flaws...This is the Assassin's Creed game we needed, yet didn't know we wanted.

Overall, Origins is a wonderful title, filled with so many new things to do and see. You can easily get lost in the vast Egyptian deserts, as I did and the new combat system is a welcome change from the ways of old. This game is definitely worth your time, and a welcome return to form for the Assassin's Creed series.