The rhythm game genre is one that hasn't received a tonne of love over the years. You have your behemoths in the form of Guitar Hero & Rock Band and your indies in the form of Audiosurf & Beat Hazard and... that's about it really. Its been a long time since anything have shaken up the market and added its own take on moving to the beat. Meet Aaero, the offspring of Rez & a musically inclined tape measure.

First things first, let's talk soundtracks. Keeping firmly in mind that this is an indie title produced by an impressively tiny team, the soundtrack is truly impressive. You have fully licensed music from the likes of Flux Pavilion & Katy B and, to coin a term from someone a decade younger than me, they're all bangers. While the team have some industry experience clout to stand on their own two feet as a studio, grabbing licensing for all of these artists is truly impressive.

The only downside to this, and perhaps understandably slow, is that the track listing is a little slim at launch. 15 tracks make it into the initial release which is definitely enough to get you started and to provide a significant amount of play time for the price. In interactions with the devs, they have expressed that they will be looking to provide more after launch via DLC but aren't sure whether they will be paid or free as of time of publishing.

Now for the meat of the game, the actual mechanics. This is where Aaero really comes alive and adds in the 'just one more game' element. You control your ship entirely via the left thumbstick on your controller with a direct 1:1 relationship to your movement. If your stick is pushed directly left, your ship is directly left rather than navigating in that direction or slowly drifting towards that side.

At first play, this feels hyper-sensitive and a little unwieldy but this eases after you've played through a couple of levels. While it feels reasonably uncomfortable to start, it definitely makes for the best and more responsive control scheme. You have a definite and precise control over your movements and this is vital in harder stages.

You use this control to ride a ribbon of light that moves around the screen in time to the music. This makes for a reasonably predictable level of music as you adapt to the controls and allows you to gauge how swiftly or drastically the ribbon will move from patterns in the music. Precision matters here as your proximity to the centre of the ribbon links directly to how many points you rack up.

Along with ribbon-riding, you'll encounter enemies floating around the screen which you can target with your right stick. You are able to line up a maximum of 8 shots at once before triggering them with R2/RT. This again follows the direct 1:1 ratio of your movement and makes for truly challenging split attention in spots where you need to be closely accurate with lining both your ship and your shots up.

A great unique addition is how the shots operate. While your gunfire being linked to the beat of the music is hardly any novel matter, the shots you fire in Aaero will only strike their target on the beat. This makes for an added layer of difficulty in timing everything perfectly to link up the perfect shot and ready up another for the next wave of enemies. You can only begin targetting once all previous shots have landed which can really make the difference between powering through and going down in flames.

As you make your way through the levels, you really start to get to grips with the controls and start improving your scoring. By the time you reach the 5th stage, you are ready for a challenge. Aaero delivers a monstrous one. Welcome to the terrifyingly close fights against the bosses.

Taking the first as an example, you battle an enormous worm. This turns into a combination of perfectly aiming and timing your shots for maximum damage along with riding ribbons inside the beast itself! There's a whopping health bar to deplete ending with the song you are riding along to. Didn't deal enough damage? You're getting devoured. You really feel the need to step up your game and perfect your skills each time these difficulty bumps occur and dealing with them feels truly rewarding.

This all takes place in a brightly vivid world with a nice simplistic design. Nothing in the background pops too much to distract you from the task at hand but you still get a great feel for whipping through the environment beyond a bland desert. It would have been very easy to use the background as another difficulty measure to throw you off your game but it seems Mad Fellows have exercised some small mercy there.

There is definitely some replay value to be found here via the leaderboards & star ratings for each level's completion. Scores on the leaderboards usually are extremely tight, separated by a few hundred in many places. There's definitely a real urge to improve just a tiny amount next run to leapfrog up the places.

Your star ratings control unlocking further content to play. It will allow you to unlock tracks further along (although this doesn't present much problem with a 3 or 4 star rating giving you access to most). However, to access the Advanced and Master modes for the truly brave, you will need to start earning 90% and 100% of all stars on offer respectively. This is no mean feat, especially in regards to the tough boss stages.

The harder modes will also add in extra difficulty in the form of further multi-tasking with more enemies spawning and spawning at more awkward portions of each track. Attempting to keep on track on the ribbon whilst dodging obstacles, lining up shots, timing those shots and keeping track of the correct order to attack enemies in is no mean feat!

Aaero comes from a dedicated team with a wealth of rhythm game experience having worked on both the Guitar Hero & DJ Hero franchises in the past. Its clear from this title, their first as a studio, that they are on track to deliver a wealth of on-going support and growth in the future. They come across as truly passionate about their title and from talking to them directly, I have faith that this is just the start of an expansive tracklist.

You'll be able to find Aaero at launch on Xbox One PS4 & Steam for around $14.99 dependent on platform and location.

The rhythm game genre is one that hasn't received a tonne of love over the years. You have your behemoths in the form of Guitar Hero & Rock Band and your in 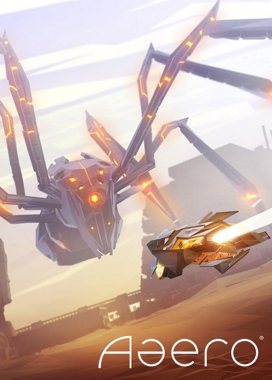 Aaero breathes fresh life into rhythm gaming and I'd write more but my score just got bumped on the leaderboard...