"Welcome To The Future!" The very first words you hear upon starting the game for the first time. Is Trials Fusion really a step into the future? Or is it a step backwards in the motorcycle series? Let's find out! Trials Fusion is just as challenging, if not, harder than Trials Evolution. With its new futuristic maps and eye popping environment, Trials Fusion is definitely an impressively looking game in the series.

The gameplay in Trials Fusion is almost exactly the same as Trials Evolution. You work through easy tracks all the way to expert tracks in a sequence to better your skills and to overcome track adversity, but with an added twist. At a certain point in the Career Mode you are introduced to BMX Stunts you can perform on your bike at anytime. There are certain maps that require these BMX Stunts for scoring.

The BMX Tricks themselves can be hard to perform and be tough to get used to because your bike has to be turned in a specific direction for a trick to work properly. This can be frustrating at first for newcomers into the series, but it doesn't take long to perfect for veterans. It can be a tough learning curve, but there aren't that many BMX Stunt maps so it comes as an unneeded add-on at some points in the game.

There is also an additional type of Vehicle. You can use a Quad Bike or an ATV on certain tracks that allow it. This, once again, comes as an unneeded add-on since it only works on some specific tracks and not all tracks.

There are also Local Multiplayer Modes where you can play with up to 4 of your friends on your PC or Console, but there is no Online Multiplayer yet. Online Multiplayer will be released in an upcoming patch. This is highly disappointing for a new Trials Release as it makes the game feel like its unfinished.

The Editor has expanded and has become even easier to use. Working in their Sandbox Environment you can create any track you want. Starting with the start and finish. Then everything in between. Track Central allows everybody to upload their New Tracks to their Network for others to play/rate their work.

The Environments in Trials Fusion can really be an eye opener. The vast levels depicting a futuristic world with all of its volumetric lighting and fog makes every track in the game feel unique and have its own place within the sequence of maps played. The PC version, of course, has graphics settings that range between Low and Ultra so almost any computer can run this game without issues.

"Welcome To The Future!" The very first words you hear upon starting the game for the first time. Is Trials Fusion really a step into the future? Or is it a step backwards in the motorcycle series? Let's find out! Trials Fusion is just as challeng 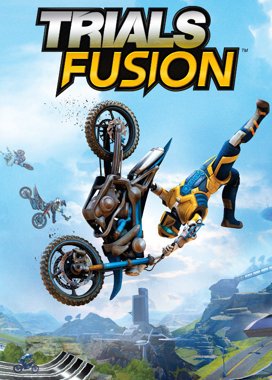 The game overall has the work of RedLynx in it but it really doesn't have anything that vastly separates it from the previous games other than added BMX Stunts that people will barely use and an ATV that can only be used on certain tracks. With Online Multiplayer missing from the release of the game it feels like a beta release on launch. The environments are impressive though. Still overall, fun!