You might be surprised to hear (or read for that matter) that Lady Lara Croft is not the first female protagonist that has graced the video gaming industry (Remember back in 1986 when we first met Samus Aran?). Lara and her undeniable assets have sold over 7 million copies worldwide making it a bestseller and catapulted her as a cyber-celebrity. Now a whopping 18 years later the franchise is still strong so let's see where it all started all that time ago.

If you didn't already know, you are Lara Croft, a young British archaeologist who searches the world for ancient relics to feed her appetite for adventure. A wealthy businesswoman called Natla, is extremely interested in obtaining a mysterious artifact called the Scion and contacts Lara for hire. Initially Lara doesn't seem to be too interested since she only plays for sport, until Natla shows her the perils that lie ahead, she soon changes her mind then begins her search in Peru. There are a total of 15 levels which may not sound like too much but raiding tombs is not exactly a quick process, so there's plenty of hours of gameplay to feed the Indiana in all of us. Upon entering a new area like an underground Colosseum in Greece, players are usually greeted with an excellent piece of music composed by Nathan McCree, really gives you the feeling you've discovered something ancient. The soundtrack is cleverly implemented at key moments in order to successfully create dramatic effects, enhancing the tension and urgency during an action sequence or stumbling on a secret area.

The game is presented in a third person perspective ensuring that Lara is always visible as well as her vast 3D environment which takes you to various locations around the world such as Egypt and Greece. The level design is extremely clever and well thought out with dastardly puzzles mixed with some dual wielding pistol action fighting henchmen, animals and even velociraptores. However having to use your guns to protect yourself from deadly foes is not the only way that Lara can perish. In fact, the environment alone can prove extremely fatal with spike traps, deadly and seemingly bottomless pits, lava pools and huge gaps to which with one slip you could be having a Lara pancake. I have been one to try and see just how many ways you can kill her off should you get stuck or lost. Visually some might see it as a bit of an eye-sore due to the blocky style, very visible textures (and glitches) and some vibrant colours, which make locating your next destination easier especially as ledges, walls and ceilings mostly sit at 90 degrees to each other. Unfortunately the Playstation 1 and Sega Saturn version of the game uses a save crystal system to which the crystals themselves can become scarce, presenting the possibility that you're in for a bit of backtracking and replaying large chunks of the level.

Does Lara have the moves to pull this off though? Well, I think that's a personal preference. Some may find the controls slightly tanky and delayed, whereas others (myself included) felt it was a smooth ride and intuitive to her surroundings. She runs by default by which you can hold one of the shoulder buttons to make her walk proving to be a lifesaving action since walking stops Lara from falling over the edge and possibly plummeting to her death. She is also able to strafe in either direction, hop back, jump, a turning roll and even turn in mid-air. With another shoulder button you are able to scan your environment, although due to the over the shoulder camera angles this sometimes is more of a hindrance than a benefit. 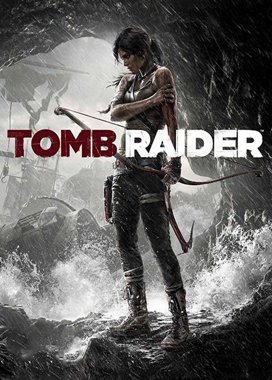 I can safely say that the game doesn't rely on Lara to carry or sell the game, although there's no denying that she certainly gave it a boost whether it be in a positive or slightly negative light. A great mix of puzzle, platform and action-adventure surrounded by a revolutionary 3D environment and an iconic character, Tomb Raider has to be one of the top games of 1996.