Thief... Or should that be Thief (2014) to not be confused with the original 1998 title... Is a “revival” or “reboot” of the Thief series after a decade long absence from the market. Why so long between games, I hear you ask? While the original Thief, and its sequel are some of the best examples of “How To Make A Great Game 101” the third entry into the series was a passable effort at best. How does the newest entry in the series stack up against the others? Find out after the jump...

Thief returns you to the role of Garrett who steals anything (literally) that isn't boarded or nailed down. Anything from cups, to knives, to pens. You name it, he'll steal it! The story is set in a dark fantasy world which takes its cues from Victorian and gothic natures. Garrett has been away for quite some time and returns to his home town, known only as The City, finding it ruled by a tyrannical maniac called The Baron. The City is ravaged by plague and famine for the masses while the rich continue to live their comfy, isolated lives.

The story of Thief could be easily forgotten if it weren't for the game being so linear. You usually can only go on one or two pre-determined paths to get to a quest hub. Once your there you do your mission, throw your toys out the pram, and leave. There is no real sense of purpose for doing these things, other than someone “important” told you to do them for adequate amounts of money.

Where Thief shines is in its true stealth game play style that is forced quite heavily upon the player. You must adhere to the shadows, using thrown objects to distract guards, or waiting for a timed break in their movement/patrol patterns, or else you will die. An all stealth play through would take quite awhile, and you WILL eventually have to enter combat. Taking one one guard is doable. Two or more? You've got your work cut out for you my friends.

The graphics are beautiful, especially on maximum PC settings. From the visually stunning scenery when atop the clock tower, to the way the city is styled, and the lighting effects(some of the best I've seen in any game). The music is wonderful and varies quite well throughout the game. It adds a sense of urgency when you enter combat, or are noticed by guards and continues to engage me in my subsequent playthroughs.

Thief... Or should that be Thief (2014) to not be confused with the original 1998 title... Is a “revival” or “reboot” of the Thief series after a decade long absence from the market. W 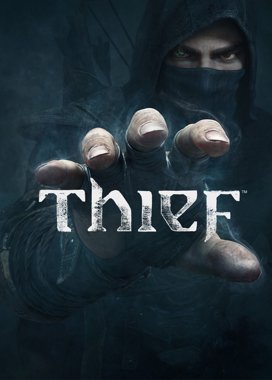 Thief got a lot right, and this reviewer could overlook the things it got wrong. It's a beautiful stealth game, with an okay, not surprising story, and plenty of things to get your thieving little hands on in the world.