Theme Hospital is a simulation game developed by Bullfrog Productions and published by Electronic Arts in 1997. Conceptually similar to its popular counter-parts Theme Park, you are in charge of designing, building and running a hospital. You will also notice a likeness in the sense of humour to the Theme Park games which can seem somewhat dark and a little corny.

Players are in charge of finances, hiring staff and building the appropriate diagnosis rooms to cover a vast range of amusing conditions such as Bloaty Head and TV Personalities. Some of the rooms are paramount to running the hospital such as GP’s offices, staff rooms and toilets. Other rooms are optional and specialise in certain conditions which will attract you new patients. They are divided into four categories: Diagnosis, Clinics, Treatment and Facilities. Each level (or map) has a different layout so one of the main challenges in running an efficient hospital is to maximise the space given ensuring you’re providing at least the basics for your patients and staff. Even down to heating, vending machines, benches, plants, fire extinguishers and rubbish bins. It’s also advisable to consider building some rooms close together as patients will queue outside the facility they need to use and so plenty of seating is also needed.

In order for the hospital to function you need to hire a range of staff members from doctors and nurses to handymen and a receptionist. Doctors usually demand higher wages naturally due to the varied expertise each can have to offer. They can specialise in psychiatry, surgery or research and even a combination of the three. Further on in the game some doctors are ‘ranked’ as consultants in which you can train other doctors to specialise in one of the three areas. Nurses simply are required to run the pharmacy, the fracture clinics and the ward to which they are responsible for vaccinations during an epidemic. The handymen have three roles in which you can prioritise from janitorial duties, machinery repair and looking after the plants. When you’re looking for well-trained staff members they not only have specific qualifications but also a small humorous description of each member’s personality allowing you to make an informed decision on who you would like to see running your hospital. Descriptions such as “Deaf as a post, smells faintly of cabbage” and “Plays in a rock and roll band” don’t always reflect directly their qualifications or attention to detail. Just the like the patients themselves, staff need to be looked after in order to keep your hospital running smoothly. Ensuring that they are not overworked, underpaid, too hot or too cold can be an annoyance as with any SIM styled game, however if you don’t keep an eye on your staff’s needs can be detriment to your reputation. Annoyingly however, the staff are not always as helpful no matter how well qualified or how you prioritise their duties. With the handymen in mind, you could have 4 hired handymen, and three of which have cleaning rubbish and vomit left by patients as a priority and yet they could be wandering aimlessly in a corridor whilst patients are sat knee-high in well, crap. This means that you will then have to pick up that staff member and almost rub his nose in it in order for it to be dealt with, as if you haven’t got enough on your plate running a hospital.

All of these elements combined make it no easy feat especially as you’re given a budget to start off with. Providing that you meet certain criteria really depends on a good balance of well-trained staff, sufficient rooms and facilities to ensure that you attract more patients to pay for treatment of fictional and amusing ailments, to which the developers probably used to keep the game away from being depressing and over-realistic. Each level introduces different challenges and requirements in order to progress through the game. Should you like a particular hospital that you’ve created you can choose to stay there for another year, although any profit or reputation does not carry over onto the next level, but gives you the choice at least to progress or not. Taking this opportunity can help the player in finding tips and tricks ensuring that their next endeavour is more successful than the previous, as micromanaging is heavily used in the game.

Theme Hospital is a simulation game developed by Bullfrog Productions and published by Electronic Arts in 1997. Conceptually similar to its popular counter-parts Theme Park, you are in charge of designing, bu 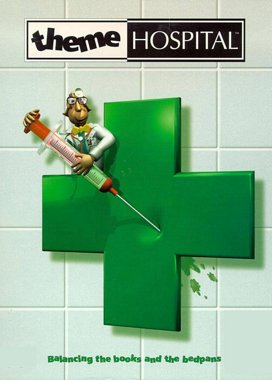 A matter of laugh or death

For a game that was released back in 1997 it never really pushed the graphical capabilities to its limits. But having said that, I don'??t think that was necessary for this game as it provides a slightly twisted sense of humour and realistic (if not a little annoying) voice acting. Although this may not be to everyone's taste they do say that laughter is the best medicine. This game I feel is slightly overshadowed by other Sim-styled games like the Tycoon series and Sim City, but still is considered a massive commercial success selling a respectable four million copies worldwide. Still an entertaining, fairly addictive game with good level depth and decent challenges, I recommend giving the demo a try at the very least.