The Evil Within Review

I audibly squealed on several occasions whilst playing ‘The Evil Within.’ Over and over again this game genuinely dragged a high-pitched scream out of my hairy, manly frame. Unfortunately, there are a lot of ways to scare me that are not necessarily indicative of a positive horror experience and simply being scary is not enough to make a good horror game. So let’s take a look within the folds of the Evil Within and see whether it really is evil in there.

First and foremost, the camera angle; Oh God, Jesus holy f***-balls the camera angle. Playing the Evil Within is like enduring a feverish nightmare where you explore Silent Hill from inside a London post box. It should be called the Parcel Within. I keep expecting our troubled hero, veteran police detective Sebastian Castellanos to at any moment, begin complaining about the paper cuts on his shins from having to lug around this heavy pill-box full of mail with him. In case you haven’t realized yet, I am not a fan of the letterbox format which the designers opted for here. When combined with the over-the-shoulder camera it makes it nearly impossible to see what the hell is going on. I played this on my beefed up, high-end PC with a resolution of 1920x1080. There is absolutely no reason why I should not be able to see where I am going and what I am doing. I get what the designers were going for here. They were looking to imitate the claustrophobic and intense over-the-shoulder gunplay of Resident Evil 4. Well that’s fine guys, but Resident Evil 4 allowed me to see what was going on above me and on the floor in front of me. When you have the visual range of a man with a periscope sellotaped to his face, the horror comes from not having a clue what is going on around you, as opposed to emerging organically, from within the game’s narrative.

That brings me neatly onto the next subject, the mechanics. The Evil Within’s controls are crippled, deliberately crippled. Sprint for more than a few seconds and detective Castellanos will stop dead and control of him will be completely taken from you whilst he gives a Shakespearean performance, puffing and panting with his hands on his knees.

This guy is supposed to be a fucking police detective in a life or death situation, not a geriatric pensioner who just got awoken out his afternoon nap. Furthermore, the guns wobble and miss regularly and the camera remains fixed as you laboriously turn around in the hopes of catching a glimpse of the enemy before it sprints up to you and fills your mail box with gory death. Look, I’m not an idiot, I get why the designers made these decisions. I realize that you can make your game feel difficult, hopeless and claustrophobic by limiting the player’s control of the protagonist, thus creating some moments of suspense as you line up your gun to make that last bullet count or slowly turn around to see that a monster is right on you. But the Evil Within seems to have based its entire philosophy on this one technique, creating a game where the horror feels cheap and cynical.

On a number of occasions, a scary monster would emerge out of the ground and come at me. Upon seeing this I would instinctively turn and run, only to find myself running head first into a wall or door frame, flailing about like a blind simpleton whilst the monster strolled over to me and began bashing my brains all over the floor. This is not scary, this is annoying. Even more so when you realize that the auto-save system is there to shaft you and you now have to go back to the beginning of the level.

Having said all of that, if you’re like me, you can recount numerous times when you’ve played a game which was mechanically sub-par but the story and the characters kept you intrigued enough to see the game through. Great writing and imaginative level design can, to a certain degree, overcome bad mechanics and to be fair to The Evil Within, it began quite strongly. Detective Sebastian “Seb” Castellanos, his partner Joseph Oda and "rookie" Detective Julie Kidman investigate a massacre at a local hospital where they are overcome by a mysterious force which throws them into a nightmare World inhabited by horrific abominations and a constantly shifting, nightmarish environment.

This is one of those narratives that keeps you in the dark about what is really going on and when done well, the payoff can often be incredibly satisfying, especially when you begin to piece together what is really going on. In a story of this kind, we identify totally with the protagonist because we are going through the same revelations that he is, we only know what he knows, much like Neo in the Matrix, that protagonist needs to be strongly written in order to carry us through the confusion. Unfortunately, Sebastian Castellanos has the emotional range of a cucumber. Most of his dialogue is limited to killing something with fire and then saying “durrrr fire works on them.” I get that this guy is supposed to be a tough, grizzled super-cop but I honestly feel that anyone, upon seeing a guy hanging upside down, gagged with barbed-wire and writhing in agony whilst a morbidly obese monster chops up human body parts on a butcher’s table, would have at least a mildly negative reaction.

Who is the real monster here? Apparently detective Castellanos eats scarier shit for breakfast because he doesn’t seem the least bit bothered by any of the horrific things going on around him. Other plot elements are equally as bizarre and confusing. For example, why does finding a bit of green goo lying around enable Detective Castellanos bullets to deal more damage? I know it’s a bit pointless to question tenuous game logic, after all, it isn't real life, but my suspension of disbelief is somewhat hampered when my six-shooter can suddenly hold seven bullets because I found a jar of green goo on a shelf and sat in my upgrading chair.

The environments look nice, when you can see them. The use of light and dark works quite nicely and surprisingly; it never feels as though the game is using darkness to trick me into dying, which I often find can be an issue with games that rely on the light-dark dynamic. The sound design is also great, with particularly scary sounds emanating from the game’s monsters as you round corners, sending a chill up my spine. The Evil Within has some good moments, but it isn’t enough to save it from my scorn. I had such high hopes for this game, considering it was headed up by the legendary Shinji Mikami of Resident Evil fame and to be fair, glimpses of his obvious genius shine through, but get lost underneath a mess of bad controls are drab dialogue.

I audibly squealed on several occasions whilst playing ‘The Evil Within.’ Over and over again this game genuinely dragged a high-pitched scream out of my hairy, manly frame. Unfortunately, there are a lot of ways to scare me that are not 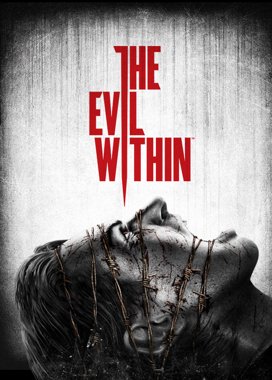 A potentially good game which fails to overcome its own limitations

The Evil Within is not a terrible game, just a game constantly hampered by its own inability to flow and horror needs to flow in order to maintain its own pace because much like comedy, good horror is all about timing. Unfortunately, the Evil Within delivers its mail far too late. And then forces you to hang out inside the mail box with a boring cop.
Overall
5.0
Story
4.0
Gameplay
4.0
Graphics
7.0