This story takes place from the perilous battlefields of the fourth-grade playground were a young hero shall rise, we’re of course on about the crazy adventures of South Park: The Stick of Truth. Brought to you by the creators of South Park Trey Parker and Matt Stone, developed by Obsidian Entertainment and Published by Ubisoft for the Xbox 360, PlayStation 3 and PC.

South Park creators bring you an epic quest to become… cool, as you earn your place alongside Stan, Kyle, Cartman and Kenny to save South Park. For a thousand years, the battle has been waged. The sole reason humans and elves are locked in a neverending war: The Stick of Truth. But the tides of war are soon to change as word of a new kid spreads throughout the land, his coming foretold by the stars.

Your quest will have you venture the very depths of South Park itself, along the way meeting all your favourite characters and some new ones. But it doesn’t stop there, as the moving vans drive away you will be able to use the character creator to digitize your very self into the game.Allowing further customization throughout the game, with a MMO based inventory and ability system.

With the creators of South Park working on this, you can expect every unique flavouring and twists just like the TV Series to appear. Even a good old censored screen for us Europeans this is only on the console versions of the game, due to marketing reasons. Which the descriptions paint a very graphic picture none the less, there only 7 scenes of which only last about 20 seconds each so don’t worry if you feel like you’re missing out on anything.

With being able to venture the very depths of South Park you able to free roam the city often not able to access certain areas until you reach a set level, much like an MMO based game (World Of Warcraft). Through out the town you will often come across elves lurking around who will chase you and engage you in a traditional japanese turned based battle scenario. There are a variation of combos to perform throughout the game, many of which are based on short timing and therefore frustrating.

Every little tiny detail from the TV Series can be found in the graphics of the game, keeping to the very art style, even during cutscenes.

This story takes place from the perilous battlefields of the fourth-grade playground were a young hero shall rise, we’re of course on about the crazy adventures of South Park: The Stick of Truth. Brou 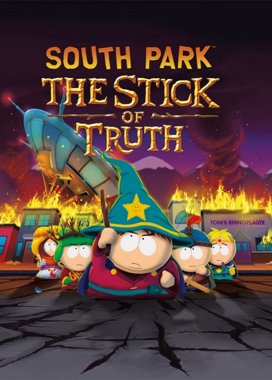 A must buy for South Park fans

South Park: The Stick of Truth has many hilarious moments for those that enjoy adult humour and even pokes a little fun at some of your favourite games. While the gameplay is often fun, it also has its frustrating moments of timed based combos that can often leave you stuck and frustrated. If you are a fan of the series, you will want this in your library.