Developed by Team Silent and published by Konami who took a brave step into publishing their first survival horror game Silent Hill. Unlike Capcom’s flagship Resident Evil series, Konami decided not to go with the typical “boo!” style jump-scare tactics but instead uses the player’s imagination against them with the aid of disturbing sound effects and a very unsettling atmosphere. This classic method can be far scarier than a small horde of zombies slowly shuffling towards you. So it wouldn’t really be fair of me to compare the two games, so I won’t as this is a unique horror game in itself. I give credit to Konami for producing a game being a clear homage to psychological horror authors such as Stephan King and H.P Lovecraft. So much so that even the street names have references to various authors and film directors such as Craven Avenue (Wes Craven), Barker Street (Clive Barker) and many more which I won’t spoil.

The game begins with the protagonist Harry Mason regaining consciousness from the aftermath of a tranquil night drive with his seven-year-old daughter Cheryl, heading toward the resort town of Silent Hill. The road is a little foggy to say the least and then out of nowhere a young girl is standing in the middle of the road. Swerving to avoid her, Harry’s jeep spins out of control and crashes at the edge of town. Waking some time later he realises that Cheryl is missing from the scene and so the search begins in Silent Hill. You make your way through various buildings in town as she leaves you clues to her whereabouts and along the way you start to learn that there is more to her and the town than you ever could imagine.

Instantly the atmosphere is disturbing with very limited vision due to the strange white substance (which we assume is snow as the season in-game is never indicated) falling and as he quite rightly points out, “It’s strange…It’s quiet. Too quiet”. Nevertheless as an extremely concerned father he delves deeper into the 3D fictional Midwestern town. One of the key factors that Konami achieved is the depiction of the protagonist being your average Joe with whom players can relate to and the use of frankly disturbing and ambient sound effects that catch the player off-guard when he is most vulnerable. You can tell that Harry has never held a gun in his hand because his aim is pretty bad, so this works to your advantage as you can conserve what little ammo you do find throughout the game by simply running away. His running pace is pretty quick (I can imagine him going for jogs around the local park waving to Mrs. Jones walking her Yorkshire terrier), but being just a regular guy against supernatural beings means you’re still only a heartbeat away from being mauled. The game’s controls can feel a little clunky and slow to respond for some and you can find yourself bumping into walls, posts and doors, however for me this gives Harry even more character. Nevertheless the controls can also at times feel rather natural as he can perform numerous useful manoeuvres such as a 180-degree turn, sidestepping and walking around with your gun drawn.

The story however is a little, well confusing if you don’t follow the plot. Not only that but you can also play through the whole game and miss some key plot points to which at the end can leave you thinking, “Is that it?”. I guess this gives the game a fair bit of replay ability since there are five different endings. The “joke” ending can only be described as something out of the X-Files. The truth is out there Harry. You are free to roam all of Silent Hill if you wish to do so and picking up the tourist looking maps which play a vital role, especially when it comes to the “otherworld” hospital later in the game. Amidst the action there are some nicely thought out, intelligent puzzles and riddles for you to get your head around.

Now as I’ve briefly mentioned before, the atmosphere and psychological meddling side of the game keeps Silent Hill from predictability. Sometimes it’s just the little things that make you repeat out-loud, “It’s only a game, it’s only a game.” Your best friend is a broken radio which emits static when enemies are nearby. Put that creepy sound with extremely limited vision and you have a very unnerving ride. Lighting (or what little there is of it) puts the cherry on the cake as it’s almost always cast from your pocket flashlight which sometimes obscures your vision as much as it illuminates. An addition that adds to the game immensely is the real-time generated camera angles. Not being able to see two feet in front of you in a dark alleyway and only hearing something moving about or grunting nearby, its presence confirmed by the sudden burst of static from your radio, is enough suspense to make me sleep with the hall light on. The environment and overall look is somewhat grainy for a Playstation game that was released into the system’s forth year on the shelves. But this couples nicely with the game’s overall eerie feel, dilapidated buildings and the decay of your surroundings as you’re unveiling the mystery behind the town.

The soundtrack for Silent Hill was composed by sound director Akira Yamaoka, who was also in charge of the sound effect creation. He apparently did not watch any of the game in motion when composing the effects, but created the music independently from its visuals. To make the game more unique in the genre, Yamaoka wanted to give it an industrial, rusty feel and so you can sense he was influenced by Twin Peaks composer Angelo Badalamenti and the band Depeche Mode.

Developed by Team Silent and published by Konami who took a brave step into publishing their first survival horror game Silent Hill. Unlike Capcom’s flagship Resident Evil series, Konami decided not to 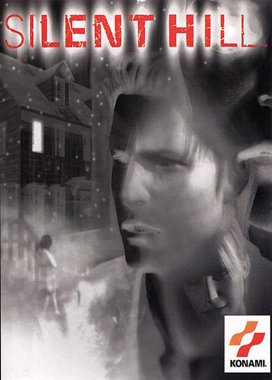 Silent Hill does a great job in building up tension, plays with your imagination by showing you disturbing images and using creepy sound effects. This game separates itself from other popular titles of the survival-horror genre by taking a slight backseat on the action front and going for the more psychological approach. With replay ability, a good mix of action and puzzles wrapped in a nightmarish bow, Silent Hill is definitely a horror title worth playing.