This is probably one of the more difficult game reviews to perform. Sherlock Holmes: Crimes & Punishments is an entirely good and enjoyable game, but only if you are able to ignore some seriously deep and disengaging flaws. These are flaws that have provided a serious knock to the overall score of the title as this would otherwise be a masterclass in how to create a fantastically absorbing “whodunnit” game.

But before we get to all of the irritating nitty-gritty, let's focus on some of the things this game does extremely well. This game is very, very pretty. This represents a serious upgrade from the previous titles put out by Frogwares in the past. You can clearly see the impact of moving over to the Unreal engine from the previously used in-house engine. Everyone moves smoothly, there really seems to be no issues with 'clipping' as there were before and there has been a high level of attention of detail throughout. All of the environments, each cobblestone, seems to have been hand-placed to ensure they are perfectly placed and pleasing to the eye.

A small gripe would be the use of ankle-high obstacles blocking off exploration, in one of the perhaps most widely seen game tropes of all time. It really is time we moved past this as they do tend to break your immersion and end up frustrating you as you see something potentially interested behind them, forever out of reach (or is it?). This is something that is probably be demonstrated in the age-old College Saga Youtube video from many years ago.

There is a very good combination of original Sherlock Holmes stories and newly created storylines to keep the series fresh. While, on the whole, the original stories are kept to quite closely, there are aspects of creative license that are taken to save creating larger environments that are a little irking. The easiest one that springs to mind is a country estate with a huge frozen lake in winter being reduced to a reasonable sized country-house with a well. Not the end of the world, but a little annoying for those attached to the original books.

Throughout the entire game, there are fantastic insights to Sherlock's thought process in a style similar to that used in the Sherlock television series. Words spring up whilst looking at something that follow a thought process. For example: 'missing buttons, bad fabric, frayed sleeve, old suit, poor lifestyle' might be a thought process followed, leading to a suspicion about their recent high wealth. It's all executed in an extremely intuitive way allowing you to make your own conclusions and thoughts ahead of the narrative provided by Sherlock's questioning.

The puzzles and cases included in this title are challenging in a good way, if a little confusing in places. There was only one occasions that it was perplexing enough to require reference to a guide, but that could just be due to a lack of skill/sleep. Nothing is overpoweringly hard and it appears that the title is tailored to be more of an experience than a difficult battle. The worst that will occur to you is the need to re-think and possibly replay a case ending to ensure a correct result.

You are also given, at the end of each case, the opportunity to not only choose who you think committed the crime (be it right or wrong), but also given the chance to perform a moral judgement on their actions and carry yourself accordingly. This is a nice touch and again reflective of Sherlock Holmes' character in the original books, definitely nice to see here. Now, onto the flows. The loading screens, dear god the loading screens. As soon as you begin to immerse yourself into the case and begin to make some progress, you are required to move to another location leading to a 30+ second transition period. This is an enormous deal-breaker for a game that is entirely based around careful consideration and staying on someone's scent throughout each case.

While each of these loading screens are accompanied with a nice scene of Sherlock and Watson travelling in a cab while checking their notes, it's unforgivable. Some of these scenes stretched beyond the 2 minute mark and were unavoidable. Some parts of the story required several scene changes to gather and examine evidence leading to spending nearly as much time loading as actually playing the case. To make matters worse, this occurs all the more frequently in the final case, really upsetting the culmination of a theme that had been built throughout the entire game.

This title is currently available on PC (via Steam), Playstation 4 & Xbox One at between £29.99-£39.99, which is a more than reasonable price for the experience.

This is probably one of the more difficult game reviews to perform. Sherlock Holmes: Crimes & Punishments is an entirely good and enjoyable game, but only if you are able to ignore some seriously deep and disengaging flaws. These are flaws 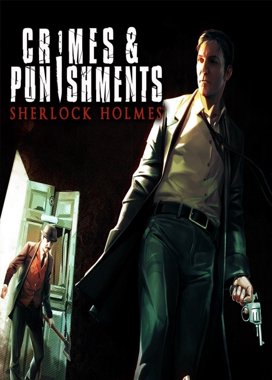 Major gripes aside, this is a genuinely good game. The cases are interesting, the story is absorbing, the voice acting (bar one character early in the game) is well performed and the visuals are impressive. If you are a fan of adventure/detective games, and possessing of a little patience, this is a must-have for your collection. You will enjoy this game but you will most likely be irked by some of the issues listed above.
Overall
7.0
Story
9.0
Gameplay
8.0
Graphics
8.0