Shadow Warrior is a first-person shooter game developed by Flying Wild Hog and published by Devolver Digital. You are Lo Wang and you were sent by your boss, Zilla, to go retrieve a sword known as the Nobitsura Kage by buying it off of someone for two million dollars. Things don't go well and you end up having to fight your way through, but end up being captured. You wake up to discover that there's a demonic invasion in the world so it is up to you to retrieve the Nobitsura Kage and end this invasion as it is the only weapon that can.

I have been having so much fun with this game compared to other old school style games or reimagining’s released this year plus I did play through the original 1997 Shadow Warrior before. A couple of the other ones I played were Alien Rage, which I did a review of, and Rise of the Triad. Alien Rage was about enough to make me rage while Rise of the Triad mostly stayed true to the original game, but Shadow Warrior just has so much more compared to them.

The sword in this game is the most fun I've had with melee in a first-person shooter game in a while. Using the different sword techniques combined with the different powers can make battles with demons very brutal. It's always quite satisfying to slice demons into many pieces and leave body parts scattered everywhere.

I'm usually not one to talk about graphics, but some of the environments look quite pretty in the game. For example, walking along a path during night time with candles and bamboo on both sides with a lake that has real-time reflections in front all lit up by moonlight which makes the bamboo cast shadows. There do seem to be some optimization issues in some areas, however. In some small concealed areas, my frame rate would be dropping just by looking at a wall.

I have heard some people say that they like the old original Lo Wang better than the new one. To me, I agree that the old Lo Wang was pretty funny, but he got repetitive after a while. The new Lo Wang still has his funny moments, but he actually gets involved in interacting with other characters so he's not running around slicing monsters and saying things like "Look! You coming apart!" or "You're half the man you used to be!" all the time.

The level design is much more open and less linear than most other first-person shooter games released lately. There are many times when the player must find keys or destroy shrines with the sword to unlock doors. For example, climbing to the top of a hill to get a key and finding many locked doors along the way then going back to unlock those doors after getting the key.

There are also many hidden secret areas in the levels including ones that are recreations of areas from the original 1997 Shadow Warrior which even use the original sprites and textures from that game. These secret areas usually have karma which is used to gain skill points or they'll have an extra amount of money which can be used to buy weapon upgrades and ammunition. One element that these secret areas tend to repeat is the sprite of a naked woman who is bathing in water while covering herself, humming and singing.

Flying Wild Hog sure did make a long enjoyable game. As of this review, I have not finished the game yet, but I played for 10 hours or so. I am sure that I will come back to play the game again many times in the future as it is just too much fun which is everything a first-person shooter game should be. 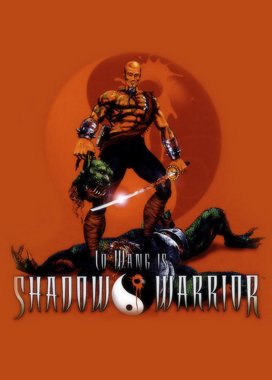 Shadow Warrior is a great combination of classic and modern gameplay elements. It's got fast-paced action and doesn't hold your hand along the way. Expect battles with demons to be quite brutal!