The Binding Of Isaac: Rebirth Review

The Binding of Isaac was a brilliantly created game, with many features akin to the common roguelike, alongside a controversial bible story as the main plot for the game. You may or may not already know this story, but I will let you unravel it as you play.

Rebirth, while it may be a “remake” it’s not a 1:1 remake with new graphics. The solid gameplay from the first is still around, only the problems many people found occured while playing, such item combinations not working or extreme lag in “busy” rooms, etc… have all been fixed. Many players had always hoped for a homing laser, or 50 exploding bombs in 1 room, but Flash limits these games as to how much can be going on at once. Rebirth gave these players everything they wanted, and more, all throughout the dev work of Rebirth. Edmund had been hinting at various items. around 150 or more new items have been added into the game adding so much more variety to the game that will bring back the old players, while also attracting new fans to the game! The first thing you will notice when looking at Rebirth is the art. A visually pleasing array of pixels, teeming with life and character. Each enemy explodes in a visceral mess of giblets and entrails, or sometimes, just a healthy mess of poop. Each new environment is unique and instantly recognisable, the atmosphere created by each new level is extremely tense, and when linked with the brilliantly composed new soundtrack, from the extremely talented Ridiculon - http://ridiculon.bandcamp.com/, It combines for a remarkable experience.

One of my personal favourite additions in Rebirth is the ability to put a “seed” into the character select screen. As this is a roguelike game, every time you play, the game will be different, items may or may not spawn, rooms can be completely different, and enemies can spawn in any kind of pattern. With the ability to add seeds in, it means you can experience the same level layout, item spawns, and boss/enemy appearances, which can greatly enhance other players experience with the game. Say you get the run of a lifetime, but your friends don’t believe you, now you can give them the seed and once they enter it, they will be able to play exactly what you played! The control scheme is something a few people had gripes about with the first game, no native controller support, it could be achieved with other programs, but why should a player have to do that just to use a controller? This is another place that Rebirth has excelled in. Two brilliantly designed and simple to use control systems, keyboard, or controller. But there is one thing lacking that quite a few players liked, being able to use the mouse in game, this has beneficial uses for certain items, but no longer is it possible to do this without any mouse support. From my experiences with the game so far, this is my only real problem with the game.

There is one part of the game that I haven’t spoken about yet, and that is the co-op. This is a feature many people have been looking forward to, and it would have made many more people buy the game. The reason I have left mentioning the co-op until this part, is because there is no “real co-op”. Only local co-op, and even then, you play as a familiar to player one, which granted, isn’t bad, and can still be very fun. However, from such a well made game, it feels almost tacked on as an after thought and could have done with some more work to really be a proper part of the game. Ever since I played my first Edmund McMillen game, Time Fcuk, I have been a huge fan of all of his games, Super Meat Boy, The Binding of Isaac, and the rest of his games, I even went as far to purchase the notes book he made during the creation of Th 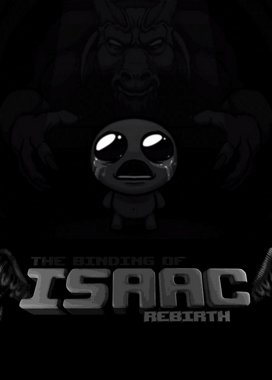 The Binding Of Isaac was a defining game for the rogue-like genre and Rebirth has just further solidified this games presence.

So should you buy this game? In a word, yes. It’s a brilliantly designed game, that will never stop being fun. With the additions of seeds, it will allow for more of a community to build up around the game. The small flaws pale in comparison to how well made and polished every other part of the game is, and they definitely shouldn’t deter you from making the right choice.
Overall
9.0
Story
6.2
Gameplay
9.1
Graphics
8.7