When first released, Garden Warfare did not appeal to me one bit. Upon first glance I was put off by the comical design and the goofy looking characters. However, after playing the Xbox One edition upon my Uncle’s recommendation, I was hooked. I bought the game from the Origin store on the PC release date, 27th June (NA 24th June) and ever since I have played almost every day.

Powered by the same engine as Battlefield 4, Frostbite 3 has brought our beloved 2D tower defence game into the three dimensional world with bright colours and explosive combat. To see a warfare game with bright colours and comical illustrations is extremely refreshing for the genre which is dominated by serious FPS games such as Battlefield and Call of Duty which depict more accurately how warfare is in real life.

The game features a 4-player co-op mode called ‘Garden Ops’ where you must defend a small garden from 10 waves of zombies that become increasingly difficult to vanquish. Upon completion, a bonus wave occurs where you must move to a landing location whilst at the same time defending yourself from another wave of zombies for Crazy Dave to arrive in his flying caravan to save you.
The main multiplayer is made of two teams and players can choose between 4 different classes on each side. Team Vanquish (also known as ‘team deathmatch’) is a race between the two teams to get 50 vanquishes (or kills). Players can be revived to deduct a point from the other team.
Suburbination is very similar to domination gamemodes that can be found in other games where players compete to control three different points on the map; A, B and C. There is no time limit which means that the game ends when one team achieves 100 points. My favourite of the eight gamemodes is Gardens & Graveyards, an objective based mode where a team of Plants oppose a team of Zombies for ownership of a garden. The team of Plants must defend a garden for an amount of time to win, whereas the Zombies must be within the radius of the garden to be able to gain control of it and turn it into a graveyard. The zombies have to gain control of six gardens, then depending on the map, players will then have to work together to complete a seventh objective.

When a player completes a match, gets vanquishes and assists etcetera, they also collect coins. These coins can be used to purchase packs of cards in-game which unlock upgrades for characters and wearable cosmetic items. This system of having a Sticker Shop works exactly the same as the FIFA Ultimate team packs, gain coins, spend coins, open packs, get stuff. When the game was first released, there were no micro-transactions which I liked because it meant that people actually had to play the game in order to unlock the cool stuff but after a few updates and in true EA fashion, the micro-transactions have been implemented. I feel that micro-transactions are unnecessary for the game as coins are already easy enough to collect; I guess it’s for the impatient, huh? Each character has their own separate levels. Characters have specific challenges to complete in order to level up; challenges increase in number and in difficulty as levels progress. At the same time as this separate levelling system there is the players’ own levelling system. Every time a character is levelled up, the players’ overall level also increases which is different to a traditional levelling system. You would expect to level up after a certain amount of experience points have been earned like in most other games but Garden Warfare does it differently which I’m not too keen on. I also dislike the lack of a minimap in the game because it can be hard to navigate the map and be able to tell where your objectives are, however since this game is very casual and seems like it shouldn’t be taken seriously anyway, I can forgive this petty matter.

Note that this game is online only so console players should ensure they have an Xbox Live Gold or a Playstation Plus subscription in order to play.

The Plants vs. Zombies craze was brought into light in 2009 by PopCap Games. Following the release of the iOS edition in February 2010, Plants vs. Zombies has grown into a huge franchise with an even bigger fanbase. \r\nWhen first released, Ga 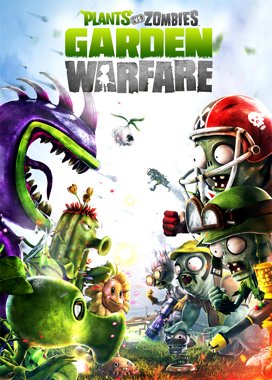 A QUIRKY BUT FUN THIRD PERSON SHOOTER WITH HOURS OF GAMEPLAY POTENTIAL.

In conclusion, this game has an amazing design with sharp colours and beautiful shadows. Although there are loads of character customisations with thousands of unlocks to achieve, gameplay sometimes feels tedious and repetitive but is easily overcome by trying a new gamemode. This game is completely different to anything I’ve ever played before; it feels brand new and energizing. If you’ve never looked at this game in detail, I heavily recommend you check it out!
Overall
8.5
Story
0.0
Gameplay
8.0
Graphics
7.0