Powered by the FOX Engine the bar between cutscenes and gameplay is gone, smooth transitions from game to cutscene is all done real-time in the FOX Engine, providing us with some truly next gen visuals, regardless to what console you choose to play on.

While the game through remains very cinematic, there are not many cutscenes in Ground Zeroes, the overall tone for the plot is much darker than what most are used to Metal Gear games. But it just makes the story that much more compelling, with Kiefer Sutherland playing Snake this time round the action combined with the story feels much more alive. (Did we mention we still love David Hayter?)

Metal Gear Solid V: Ground Zeroes campaign may be short, someone even beat it in ten minutes, but there is a lot of replayability for hours afterwards. For the first time in a Metal Gear game, the adventure is a non-linear one, played out in the US Naval Prison Facility know as Omega Base. Sharply presented it’s a testament to its character that feels entirely different locale depending on the change of weather. While the campaign’s Omega Base is a rain-soaked isolated prison full of hidden secrets and threats, many side-ops take party in daring brutal sunlight.

Offering up tense situations, the reflex mode is a nice touch that can help keep you hidden allowing you a brief moment to react and silent take down an enemy without them raising the alarm, assuming you kill or tranquilize them in time. This feature can be turned off for those who do not wish to use it.

Ground Zeroes allows players to mix stealth up with loud chaotic gun fights, ultimately bringing in more re-enforcements, but take head you will be penalised as stealth is still the preferred means for Metal Gear. It’s a nice balance between the two, bringing many different ways to tackle your missions. Enemies are smart and plentiful, in the harsh light of day played on Hard mode they possess cruel 20/20 vision, reacting to every little movement or shifting shadow. 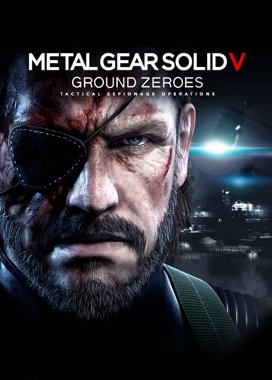 Metal Gear Solid V: Ground Zeroes is a short but challenging game, offering many hours of replayability. Ground Zeroes represents a new, more sophisticated era of Metal Gear playing much better than its predecessors, with stunning graphics. Delivering an incredible promise for its big brother in The Phantom Pain. For its price it’s a must buy for any new or existing Metal Gear fans.