The mere mention of the name probably has you thinking of the classic game that has been around since 2003. Designed by Tetris creator Alexey Pajitnov in 2003 as a PC title to appeal to "casual gamers".

10 years and many variations later, we have Hexic for Windows Store, the latest version in this long line of puzzle games but the first not developed by original developer Cabonated Games.

Does this version live up to the legacy of Hexic or is it just a cheap cash grab to capitalize on the new Windows Store format? Find out after the jump. 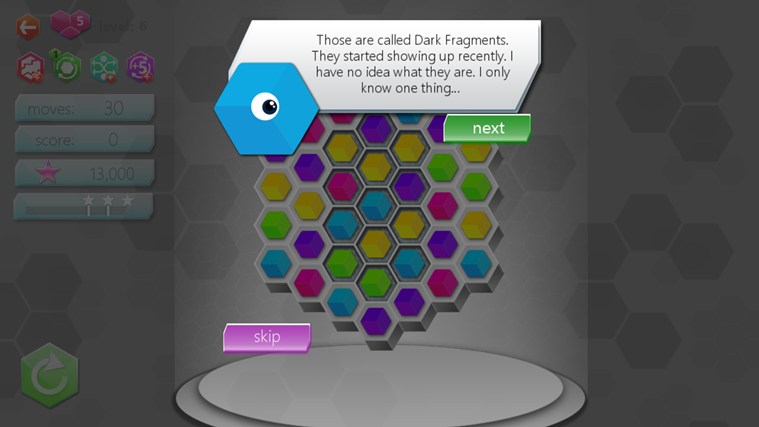 Hexic has always had a simple premise; gather like-colored squares, diamonds, octagons, etc in groups of three to clear them off of the playing board. Combining 4 or more like colored objects results in different power ups becoming available to help you clear the board. The entire presentation of Hexic as we've come to know it has changed, with each "hex" having its own personality as a character on your screen (see above image). You are guided throughout the game by these characters, and the scrolling text can be quite funny at times. There is no story to be had here, however even with the addition of the "characters" and that is something I think could have been a nice step forward for the series.

This iteration of the game has allows you  to face off against friends via Xbox LIVE. Your goal is to beat their high score, while hitting different star completion goals to beat the level. This gives the game a nice sense of replayablity, especially for a free to play title.

There is a cash shop located in game, but it only seems to offer power ups that you already can unlock via playing the game anyways. So no real added benefit of using the cash shop unless you want to unlock powerups early.

The game definitely kept me engaged for quite some time, and its a great way to pass the time if you've found yourself with nothing else to do.

Hexic is available for all Windows 8 operating systems including Windows 8, Windows 8 RT, and Windows Phone via the Windows Store.

Hexic.  The mere mention of the name probably has you thinking of the classic game that has been around since 2003. Designed by Tetris creator Alexey Pajitnov in 2003 as a PC title to appeal to "casual gamers".  10 years a A fun and quick passtime

A great way to pass the time, easy and fun for all ages.