While at Eurogamer Expo 2013 we had the chance to talk to the CEO of BetaDwarf Steffen Kabbelgaard about Forced, bearing in mind this is the first time myself and Sam Murray from NerdJunkies had even seen this game. It’s one of those games that at first manages to stay under the radar and surprise everyone.

Forced is a one to four player co-op arcade adventure with puzzle and tactical elements. You are cast as slaves in the toughest fantasy gladiator school of them all, condemned to fight as a gladiator and eventually win your freedom. You will face deadly trials and huge creatures, but Balfus, your Spirit Mentor will guide you in your quest for recognition.

After we conducted the interview I was intrigued in the game heavily and bear in mind I’m your typical First Person Shooter guy who occasionally may play an MMO such as Guild Wars 2. So once I had come home from Eurogamer I downloaded the game installed it and wrote a small article regarding my first impressions of the game even played with Alex Jorgensen BetaDwarf’s Animator and Community Manager. So my first impression of this game where amazing, not only do you have a game that for steam early access is really stable and fun to play. It even offers one of the best co-op experiences to date.

Giving you the option to play with both the mouse and keyboard for traditional PC Gamers, the game also offers player to play with the gamepad. So to get a full sense of how well this game has been developed I have played with both the mouse and keyboard and gamepad. And I have to say the controls are beautifully designed to allow quick and elegant but deadly attacks against your opponents.

While Forced may currently only be available for PC, Mac, Linux and Wii U I would love to see Forced hit other consoles such as Xbox Live Arcade and PlayStation Network. Forced also offers a cross-platform experience with its co-op meaning you can play, PC to Linux, Linux to Mac and so forth.

But it doesn’t stop there, Forced offers some of the best and beautifully designed levels to date forcing the player to think how to overcome obstacles and even rely on communication between teammates if you are playing in the co-op campaign. As you progress through trials collecting crystals at the end of each trial to unlock new skills to help you defeat your foes and gradually becoming stronger, you face a guardian (boss) for each section.

Each guardian has his own skills, and traits that will test your wits and skills, however you may sometimes have to go back to another trial to earn some extra crystals to become just that little bit stronger to defeat your opponent.

While at Eurogamer Expo 2013 we had the chance to talk to the CEO of BetaDwarf Steffen Kabbelgaard about Forced, bearing in mind this is the first time myself and Sam Murray from NerdJunkies had even seen t 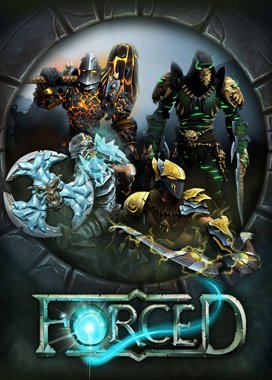 Forced is a beautiful, challenging game with one of the best co-op experiences to date, I would highly recommend picking up this game.