DmC: Devil May Cry a “rebirth” of the series from UK-based studio Ninja Theory creators of Heavenly Sword and Enslaved, have done an outstanding job on this game. At the core of the Devil May Cry series the conflict between brothers Dante and Vergil has always remain one of the coolest parts. In DmC we see the bond between brothers in a more realistic setting with some shocking and supremely intelligent turn of events.

While this may be a “rebirth” of the series DmC stays true to core from the original series with its gameplay elements and storytelling, while taking a much needed new direction towards character design, story-telling and cinematic. With Ninja Theory being behind all this it truly adds on to the existing franchise as a rebirth done well. Many of the existing Devil May Cry staff at Capcom returned to guide Ninja Theory in the development and help make sure the game stayed true to its core.

Vergil recruits Dante to help deal with Mundus a demon king who controls the world through contemporary means of debt, surveillance and soft drinks. Presented in stunning visuals and environmental pieces that truly sets this game apart from others. However when stepping through into limbo underneath the human empire Mundus’s bubble takes a creative twist with being present in some truly upside down worlds.

As you progress through the game Dante uncovers the truth about his past as well as his remarkable powers. These powers help drive the combat in DmC, with many combinations and many weapons to choose from such as “Rebellion, Ebony & Ivory, Arbiter, Osiris, and Eryx”. As you progress in kills you can upgrade each weapon and the abilities Dante obtains allowing the index of his arsenal to grow and presenting you with more moves to eliminate your enemies.  Ninja Theory shows of some its most intelligent design to date on how Dante regains his powers taking some key lesson from its previous projects. From simple interface to simple but elegant combo moves the structuring on the control system is one of the best yet allowing you to flow through DmC live rivers of the demonic and angelic blood flowing through your veins.

Switching between your demonic and angelic powers is as simple as hold a button while pressing the combo moves should you not hold the button for either of these powers you will fight in Dante’s “Human” form wielding Rebellion. Varity of techniques will help you slay you enemies down allowing you to progress throughout the story, each move is yet simple and extravagant to exercise. The control vibrates to help notify the player when they enter a combo transition to help players decipher when to input the next command.

With the demonic powers offer a slow but powerful attacks, his angelic powers offer fast and effective attacks to maintaining crowd control for larger group attacks. There’s no limit to performing these attacks, meaning that not only can you do single combos but an arsenal of combos combined. While you have a vast arsenal of combos the battle system only gets better with the ability to pull enemies closer to you or pulling yourself to an enemy position using the demonic or angelic claw.

As combos fuel the addictive style point system which returns in DmC affects a players overall mission ranking and is uploaded to a global leaderboard. However unlink the previous Devil May Cry games the point system in DmC is now transparent allowing players to see just what they’re doing to achieve rank SSS.

Enemies now display intelligence but to the players benefit, each attach is disguisable through either a visual means or an aural cues sometimes both. Allowing the player to effectively counter attack these attack making the fighting fair or at least more reasonable even during some of games most difficult sections. Off-Screen enemies will reduce their aggression so not attacking the player from behind before the player can even counter attack.

While these elements might make the game sound a lot easier it’s not, it boasts with five different difficulties, the first of which comes divided into three sub-difficulties for beginners to select. While increasing the difficulty will see an increase in enemy numbers and various increases to the enemy’s intellect, this will add on to the game plays time and effectively making the game last longer.

Pausing the game will reveal a timer which tracks how long players have been playing since the last checkpoint. This allows them to gauge their progress and decide if/when to use restorative items or suffer a score penalty and restart from the previous checkpoint. With a new addition to the game being the training mode which allows Dante to go into an all-out white background facing invincible demons allow players to try out varies moves and counter attacks.

While DmC has its beautiful and stunning visual, fantastic characters, story-telling and combo system it’s not without its faults without a dedicated lock-on button fighting large groups can become troublesome at points. The camera attempts to keep up with all the action and has its odd moment where it will fall behind but it does its job brilliantly.

These complaints are very minor however it wasn’t extremely frustrating like some games now a days that try this technique. The story had its twists and turns some moments you just didn’t expect others you saw coming a mile away there are the iconic moments of Dante’s behaviour a comedy elements in the story to which adds a few moments of laughter and really makes you feel attached to the character. The story its self will take around 10 hours or less on the lowest difficulty and obviously as you add on to the difficulty so will the length of the gameplay as you face more enemies. 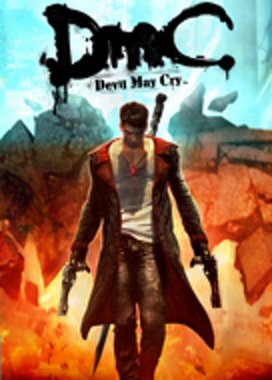 This is Devil May Cry at its finest, covered in the blood of demons and angels alike.