Dead Space 3 is a game that really stands on it's own from the Series. The way the story has progressed and the way Issac has developed as a character overall. The game starts on Tau Volantis, an ice planet where SCAF members are trying to retrieve a codex to give to a Dr. Earl Serrano. En route they are attacked by Necromorphs, mosters created from corpses. They retrieve the Codex but are ultimately killed by a Unitologist who believes that the Markers are divine and that the current necromorph infestation going on in the Galaxy is Man's next stage in Evolution.

We cut back to Issac who's seperated himself from the world, and Ellie, in order to avoid the terror that he knows is out there. Everything he's experienced on the USG Ishimura and EarthGov still haunts him, but his haunting of Nicole is gone. Ellie sent Issac a recent message stating that she's moved on, when in fact, she's still trying to find the source for all of the markers being activated. Yes. There are several markers on other planets created by man. Issac is thrushed back into the Horror he tried to escape from by 2 Operatives that Ellie sent to Issac. Jack Carver and Robert Norton. Without giving away any big spoilers... Issac works with these guys to go find Ellie and Issac is once again pushed into the world of the Markers.

Hint: Once you get to the end of the game you will be satisfied with the ending. Just listen after the credits.

Now the gameplay of this game really hasn't differed from the other two games in the Series. It has it's small differences which is nice. As an avid Dead Space Series follower, I've really liked how the gameplay hasn't changed between the games vastly. The only things I can really has changed is maybe the scare factor and much more action. But I really can't tell if it's the game that's not as scary, or if it's me getting used to the scares. Now there are some really great scares in the game. Not as many as people would want nowadays but they are there. The core gameplay is still there.

One nice addition, that I like personally, is Coop! You can run through the entire game with a friend at your side :D. There's a big group of people that say this will eliminate the scare factor entirely but I really don't think so. Even in the Dead Space 3 Demo when I played with friends we were having those frightening moments that would make you jump when you were on your own. Coop makes the game way more interesting. Having to rely on a friend to get through certain coop synchronized doors. Yell at them to shoot an incoming Necro because you're stuck in the middle of a reload. The coordination between the Two Players is more of an addon to the scare factor than an elimination. It forces two players to have to work together all the time to complete their goals and share the experience together.

There are optional missions you can also play throughout the Campaign. Some that require a coop partner. Helps explain backstory and what has happened in certain areas and how they came under attack. Some also have nice treasures when you finish. 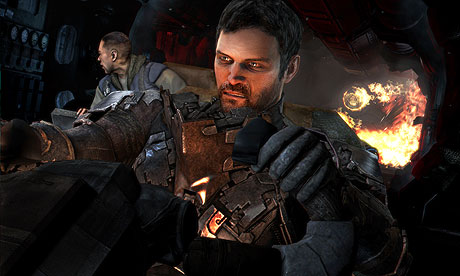 Graphics are good in this game. Personally I thought the graphics from Dead Space 2 were better but it was probably because Dead Space 2 wasn't a straight up console port. Dead Space 3 was so there is a reduction on graphics sadly.

Additions to the game that have really made it different than the previous two games are... 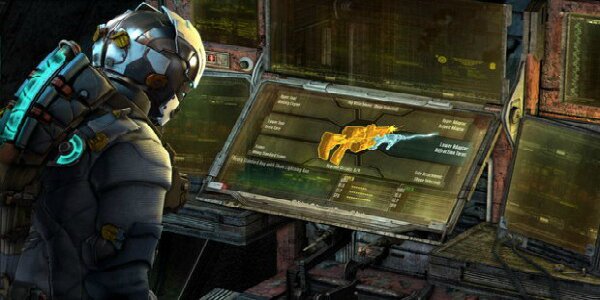 You can create any kind of weapon you want in the game. Whether you want a Line Gun with a Force Gun Secondary. The Possibilities are almost endless! Pick up parts everywhere in the game to assemble at the bench and create away! The store is basically gone but the Bench takes over for everything. You no longer buy items but instead create them yourself out of parts you pick up. Items can also be stored into the Bench's Safe and be picked up at any Bench in the game.

There are several instances in the game where you must wall climb in order to proceed through the story. I have found these personally to be glitchy at a few points but not too bad overall. The Climb is the hard part. Going down is easy and fun.

New Necromorphs of course. The bosses are just out of this world awesome! Literally XD. Don't wanna give too much away without ruining it for any newcomers.

Dead Space 3 is a game that really stands on it's own from the Series. The way the story has progressed and the way Issac has developed as a character overall. 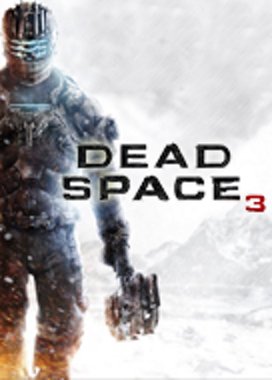 I really like the game. I've been involved with the Dead Space Series since it came out in 2008. I've watched the movies and played Dead Space Extraction on the Wii. This game is really alot of fun to play. Replay Value kicks in when you finish the game and you can replay with your last game items. The Cooperative addition really does add on alot of value. For me at least. Multiplayer Online was dropped, which kinda sucks, but it really wasn't that great to begin with imo. This game focused on the Campaign only and it really had an ending that made me jump from my seat in excitement!