BroForce may look like your typical 2d side stroller in an 8-bit retro look, with generic sort of shoot premise. But what make this different from others is the wide array of characters the player can unlock as they play the missions. As you rescue the them from the cage,s like a P.O.W rescue mission, the player changes places and becomes the new character you unlock.

The characters are whimsically renamed, but you can tell who they are just by looking at them and yes, they all have Bro in the names.

Below is a list of name of the characters you can unlock, with there own special ability:

Just to name a few there are others in there make up a more diverse cast of action heroes from 80's and 90's. Even thought that the game is in early access this game really fills a hole for any one want to play a simple platform shooter. With destructible environment and endless hours of fun. As you plow thought hordes of generic baddies and a few beefed up goons to test you.

There are some thing that one would find frustrating and that is the fact that you can get stuck and have no choice, but leap off edge and die, forcing you to redo that part of the level.
Another time is where the screen moved ahead of your movement. Falling into a trap could be consided bit of a game breaker. But other then that, I feel the game has really good potential.

I have yet to try the online modes. For example, Race where two players race to get the highest score. Another example is a scenario where the players have a mini fight with one another. At £11.99 on Steam, I think if you looking for something that had some good fun, and a poke at film characters as you progress through the missions reliving the retro fun, I say give this one a look. Below is a video of the game, to give the game a look. What sort of film personality would you like to have added to this game and why?

BroForce may look like your typical 2d side stroller in an 8-bit retro look, with generic sort of shoot premise. But what make this different from others is the wide array of characters the player can unlock as they play the missions. As you rescue t 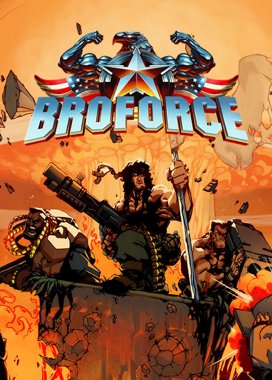 Super awesome fun that may be worthy of a bro manse for those that miss the 80's and 90's action of the past.