Castlevania: Lords of Shadow 2 is an action adventure game developed by MercurySteam and published by Konami.  It has been over 1,000 years since the events of the first game.  You are Dracula, Prince of Darkness, and after so many years of hibernating, you have become weak and lost your powers.  Your old friend, Zobek, came out of hiding to warn you about Satan's return and that you must defeat him or else he will have his revenge on you and Zobek.  As Dracula, you became tired of the evil things you did before and wanted to leave it all behind so Zobek promises to end your life for you if you defeat Satan.  Now, you must set out to regain your powers and train to become strong enough to fight against Satan.

Castlevania: Lords of Shadow was such an epic, action-packed journey that I really enjoyed playing through.  When I had first heard about how Lords of Shadow would be very different from the previous games in the series, I wasn't sure if I would like it or not.  I ended up loving the game overall, but it did have some problems in it.  There were the fixed camera angles which could be frustrating because I wouldn't be able to see the other enemies around me sometimes so I wouldn't see some attacks coming.  Another thing was the quick time events(QTEs) which mostly happened during boss battles and it would be pretty frustrating sometimes because I'd end up hitting a button too soon.

Now, from the start of Lords of Shadow 2, I noticed there are some cool new changes to the magic system which anyone who has played the demo has seen.  Rather than being light and shadow magic, they're now named void and chaos magic and they take the form of separate weapons this time around instead of being powerups.  Void magic takes the form of a sword while chaos magic takes the form of claws.  While the normal combos in the game are pretty much more of the same from the first Lords of Shadow, void and chaos magic add a lot more nice combos and secondary weapon powerups to use such as being able to throw ice crystals while void magic is active and the ability to throw bombs with chaos magic as well.

Those problems in Lords of Shadow that I mentioned above are pretty much fixed in Lords of Shadow 2.  The camera is now fully third-person view with the player being able to control it most of the time and it can automatically zoom out during combat to help with seeing the enemies around.  Also, those QTEs are now completely optional since there's an option in the game's settings to play without them, but they have been made easier than they were in the original game.

The graphics have improved a bit over the original Lords of Shadow game with things like higher detailed characters and new visual effects such as lens flare and motion blur.  Lens flare is mostly subtle in the game and usually can be seen coming from bright lights and surfaces.  The motion blur is also a nice touch since it not only applies to the camera, but all moving characters and objects in the game as well.  In the week prior to the game releasing, there was a pretty large update to the game and I discovered that the update added a high-definition texture pack to the advanced video settings which did make a difference and it's good to see that the PC version gets such a nice exclusive feature so people won't be having PS2 quality textures.

Just like with the first game, I feel that the best way to play is with a gamepad.  Although, the player can control the camera now so using the mouse is at least better for that.  However, it can be a bit difficult to use the keyboard during the battles in the game so I just stick to using an Xbox 360 controller.

For the first few parts of the game, things are mostly linear and you will travel back and forth between the memories of Dracula's castle and the real world.  Going into the castle for the first time was very sudden for me since one minute I was in the real world transforming into rats to sneak past guards then the next I was walking through a hallway in the castle.  However, there is something there in the castle that haunts Dracula and does not want him to leave which can be really creepy.

Some of the boss battles in this game just feel like they're too easy and I'm playing on hard mode.  In the first game, I was having a hard time with a lot of boss battles and I was playing that on normal mode.  Maybe it's the new third-person camera that makes it easier to see what kinds of attacks the bosses are throwing at me, but I've noticed that at least one of them will constantly stand in a block stance while I bash away at them with the chaos claws to break their block.

There are parts in the game where, as I mentioned before, Dracula can transform into rats to sneak by enemies plus the rats can crawl through small openings.  The rats can be stomped on by the enemies if they get too close to them, though.  I was expecting Dracula to be able to transform into a bat to fly around, but rats?

Not all of the stealth situations involve transforming into red-eyed rats, however.  In one of them, I had to sneak past someone who was hunting Dracula so I could retrieve an item which is part of the main mission.  There were bells I could use to distract the enemy away from me.

It feels really strange to be in a modern day city in this sequel.  It's almost as if I'm playing an entirely different game that involves Dracula running through the streets slaughtering anyone and anything that gets in his way.  The modern day city environment is definitely different for the series, however, it just feels kind of less interesting compared to the medieval environments of the first game.  The city was built on the ruins of Dracula's castle and a few pieces of it remain here and there.

Unlike the original Lords of Shadow, this game is more open world rather than the areas being separated by chapters.  There are no loading screens and everything is loaded on the fly.  Throughout the game, there are various locations in which Dracula can go back and forth between his castle and the real world with new areas to discover as he regains his abilities.

Òscar Araujo has, once again, done an amazing job with the soundtrack.  This time around, he not only did orchestral work, but there are some electronic synths mixed in as well which make for some interesting music tracks.  Most of the music has a darker sound to it compared to the original game's soundtrack like the title music, Dracula's Theme, and the combat music is quite epic as well.  Some of it even reminds me of the work that Jesper Kyd did for the Hitman series.

There really isn't as much of a story in this game compared to the first one.  It's mostly been Dracula talking to someone about a mission before setting out to complete it and then returning to them to talk about some other task to complete with maybe a conversation or two in between.  Some of the more interesting story cutscenes are in Dracula's castle, however.

Castlevania: Lords of Shadow 2 is an action adventure game developed by MercurySteam and published by Konami.  It has been over 1,000 years since the events of the first game.  You are Dracula, Prince o 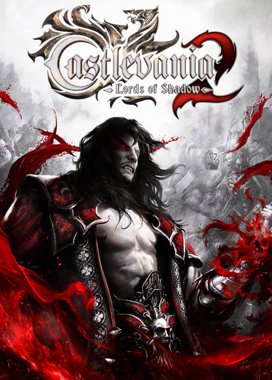 Castlevania: Lords of Shadow 2 has some nice new improvements and features over the original especially with the magic system. The story is just a bit lacking and the modern day city environment may not appeal to all plus some of the boss battles are a bit on the easy side. Still, it's a lot of fun to go out and kick some ass as Dracula.