The latest instalment of the Call of Duty series has undergone many changes to reinvigorate the series. Developed by Sledgehammer Games, this iteration is the biggest and most successful departure from previous Call of Duty games since Modern Warfare. Advanced Warfare is the first game out of Activision’s three-year development cycle the Call of Duty series.

Advanced Warfare takes the strengths of fast-paced run-and-gun shooting tactics from previous Call of Duty games, committing itself to the king of flexibility and mobility of the battlefield. Making it one of the fastest and focused Call of Duties to date.

Advanced Warfare’s futuristic single-player store reflects of contemporary real-world news: weapons of mass destruction, a dysfunctional congress, growing PMC’s (Private Military Corporations) and American interventionism. Beneath it all there’s a layer of truth that might just leave some goose bumps.

With the addition of Troy Baker and Kevin Spacey being brought into the cast, the story is brought to an entirely new level of performance making it one of the best single-player campaigns yet for the Call of Duty series. Troy Baker plays as Mitchell the player’s character who is reserved after a personal loss, but unquestionably dangerous and loyal.

Kevin Spacey who many will know from his role in House of Cards TV Series, plays as Atlas Corporation President Jonathan Irons speaking with unwavering confidence, is one of the most charismatic bad guys I think everyone will like.

With the actors performances mixed with some of the best character models and facial animations to date the story is really brought to life. To get a true next generation feel for Advanced Warfare its best played on Xbox One, PlayStation 4 or PC. As lighting looks flatter and textures look less defined on the Xbox 360 and PlayStation 3, however if you’re not in it for the visual fidelity, movement and shooting is just as fast and fluid as it is on the modern machines.

Being a Call of Duty game will generally mean you expect a handful of stereotypical missions where the guy in front of you has a big “follow me” symbol above his head. While most level designs are tightly linear as they’ve ever been, almost all come with a unique gadget that changes the somewhat repetitive human and drone enemies, keeping it fresh. From stunning large groups of enemies with the Sonic Emitter, to leaping to great heights with the grappling hook almost playing cat and mouse with enemies. The grappling hook can also be used to snatch an enemy while being hidden from a height or in some foliage. While another level lets you drive a hover tank and another that takes place beneath a crumbling glacier; one of my favourite levels in terms of level design.

While most levels are tightly linear there is one particular mission that will surprise Call of Duty veterans. The stealth level, for example where the player can only use their grappling hook to avoid being detected to navigate a highly patrolled area to reach their target. Providing players a moment to feel badass without needing blow everything up, even though explosions are entirely satisfying.

But it doesn’t stop there, there are many more extremely satisfying moments in the campaign but one of the best features which we haven’t talked about yet is the Exo-Suit and your arsenal of weapons.

With a variety of great-sounding weapons, grenades and gadgets to the job done, only a few stand out. Threat Grenades that highlight enemies through walls, directed energy weapons (lasers) that burn through armour, and of course the highlight of your entire arsenal is your Exo-Suit.

The Exo-Suit provides you with beyond human strength and agility, making you a true soldier of the future but it doesn’t stop there, you have the ability to upgrade certain elements of the Exo-Suit by completing certain challenges through-out the campaign almost reminds me of Crytek’s Nano-suit in the Crysis series.

While these upgrades are only limited to the game’s campaign Advanced Warfare’s matchmaking system also takes advantage of the new Exo-Suit bringing with it a new era of fast and fluid paced combat. But if you’re a Call of Duty veteran who’s not enjoying the Exo-Suit don’t worry there’s classic playlists, where you can’t use Exo-Suits.

The Exo-Suit has made multiplayer extremely enjoyable once again, from boosting to heights to fast dodging firefights making yourself an even harder target to kill. Ground pounding enemies from heights is extremely satisfying when they aren’t expecting it. Scoring kills feels extremely rewarding in this new fast paced arena.

Of course it wouldn’t be a Call of Duty without customization, and Advanced Warfare brings this to new heights from supply drops that grant time limited armour or weapon variants with better stats to make you a total badass. Customizing character now has many options from choosing your characters head, to all the individual body armour from boots to helmets. However it has to be said the lack of choice of female characters is a bit of a let-down for female gamers.

Changing your loadout now allows up to 13 choices which expands Black Op 2’s Pick 10, giving you more flexibility that you could ask for. Not good to get those score streaks? Not worry you can get rid of them and add other gear to your loadout. Not sure about your loadout? At a hit of a button you can be testing it out in a virtual fire range. This is one of the most convenient and extremely useful tools, it should become a standard in any loadout-based multiplayer shooter from here on out.

The new collection of maps and modes make great use of the Exo-Suit by enabling vertical movement, bringing a mixture of wide-open areas and close-quarters areas that enable tradition Call of Duty action. But be careful not to fall into the old Call of Duty habits.

Players can always jump into the Combat Readiness Program before trying out true multiplayer. It’s a noob-friendly environment where there are no kill cams, no post-game scoreboards and a mixture of nameless bots and players. Players that score too high a body count will be locked out to avoid discouraging new players, making it a much more casual-friendly zone.

The other mode you can play is called “Exo Survival” a cooperative experience, where players face wave-based enemies. One moment you’ll be fighting cloaked enemies the next picking up Intel, then fending off giant robots. It’s a nice mixture of defensive and offensive objectives and working together with up to three friends and picking complementary Exo-Suit’s is crucial as the waves become more difficult. As you progress through the waves you’ll be able to spend your unlock points on upgraded suits and weapons within a round.

The latest instalment of the Call of Duty series has undergone many changes to reinvigorate the series. Developed by Sledgehammer Games, this iteration is the biggest and most successful departure from previous Call of Duty games since Modern Warfare 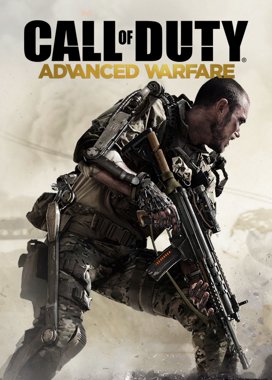 With the addition of the Exo-Suit Advanced Warfare is a big change and for the better it’s made the multiplayer a more fast and fluid arena of combat with a mix of traditional Call of Duty gameplay with a mix of verticality. Advanced Warfare’s campaign follows suite with great performances from actors like Kevin Spacey and Troy Baker who bring their characters performances to life with some of the best character and facial animations yet. This is a Call of Duty game like no other but retains its strengths that make it a Call of Duty.
Overall
9.5
Story
8.5
Gameplay
9.2
Graphics
9.5