Developer Quantic Dream has been trying to perfect its distinctive form of interactive storytelling for a decade now. With Beyond: Two Souls I feel Quantic Dream have really hit the spot on interactive storytelling, with providing the player with a variety of options during segments of gameplay but ultimately still carrying the story on a linear path based on your decisions.

While Beyond: Two Souls has no narrative that ties to previous Quantic Dream titles such as Indigo Prophecy and Heavy Rain, it does however share majority of their DNA.

Beyond: Two Souls introduces us to a young gifted girl named Jodie (played wonderfully by Ellen Page). Like many younglings at her age, Jodie has an imaginary friend, but unlike others Jodie’s pal Aiden is very real, a supernatural entity with the ability to possess people, even kill them, move objects on their own and heal wounds. After your parents make the frightening discovery that Jodie is different from everyone else they leave her in the care of Nathan Dawkins (Willem Dafoe), who becomes something of a surrogate father to Jodie as he tests the limits of her abilities.

Quantic Dream leaps chronologically through 15 years of Jodie’s life, but is not a straight shot to womanhood. Beyond: Two Soul’s story is constantly bouncing between memories of Jodie’s life right up to the present day.

How you interact with Jodie and the world around her varies widely from scene to scene. Such as choosing whether Jodie answers a question with hostility or compassion, steering a motorcycle through winding mountain roads as you evade the police or simply making dinner for a date with a series of button sequences. But the interaction doesn’t stop there you can switch to Aiden at almost any point during the game, with the ability to fly through walls and ceilings. Playing as Aiden often allows us to watch Jodie from a distance allowing us to establish a believable emotion connection between the two.

While Quantic Dream have improved greatly on their third pass of the interactive storytelling genre, there are a few moments that can be frustrating which is down to you reading how Jodie’s body is going to move and pushing the analogue stick in the right direction at the correct time.

Despite the frustration, Beyond Two Souls often succeeds where predecessor Heavy Rain failed because not only has the storytelling been improved but so has the performances from motion capture, being the best motion capture in a game to date. As you can truly get a sense of all the emotions coming from each actor as the facial and body animations leap right over the uncanny valley. 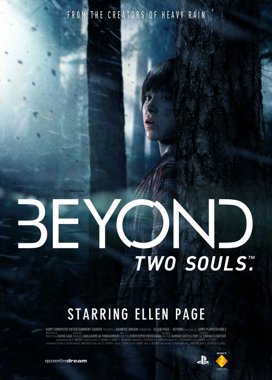 With Beyond: Two Souls, Quantic Dream have taken away the rough edges of Heavy Rains interactivity and provided us with a beautiful story, world and performances from some of the film industry’s best actors. Offering a truly interactive cinematic experience.