Assassin's Creed: Unity! Or: How I learned to stop stressing and love in game bugs.

Who let this buggy mess of a game be released? Do games at Ubisoft not go through quality assurance tests anymore? Did they fire their in house game testers? WHAT IS HAPPENING?!

Assassin's Creed: Unity was supposed to be the first major Assassin's Creed “Next-Gen” release. With a completely overhauled engine to work off of, an entirely new story line featuring revolutionary France, and what sounded like an awesome co-operative mode it seemed like Ubisoft could do no wrong. I remember sitting at the Microsoft E3 press conference with my mouth hung open at how amazing everything looked! Fast forward six months... Unity's major strength (outside of its graphical prowess) is its story, and that’s not saying much. You play as Arno Dorian, who joins the Assassins to investigate the murder of his adoptive father on behalf of his adopted sister, Elise, a member of the Templars. And that’s pretty much it. The characters are forgettable, the chemistry between Arno and Elise often feels one dimensional, and the story is choppy and disjointed everywhere else. Ubisoft had an amazing opportunity to tell a Romeo and Juliet-esque love story with Arno and Elise, and to take massive liberties with one of the most well known parts of French history. Instead, they gave us this.

The game is absolutely beautiful. Hell, its stunning at times. The visuals from atop some of the structures and buildings made me stop and just stare for a few moments. These moments are few and far between and thats a shame. Character models are light years better than any AC game before it, and the massive crowds really make you immersed in the world. All of that praise goes down the drain when you actually start to play the game however. In my 20 years of gaming, I cannot remember a major AAA game release with this many bugs, problems, and just overall frustration over things that should have been resolved before the game even launched. This is 2014 and getting stuck in walls, under the map, in hay carts is unacceptable...These are just a few small examples of the bugs I encountered in the first few hours of game play. Characters suddenly appearing out of nowhere. Scene pieces such as boxes suddenly appearing out of nowhere and tripping you up when you're running after a marked NPC. Its ridiculous. Ubisoft have released two major patches since launch, with some users reporting the issues are still existing!

Co-operative play feels like a total afterthought and is a huge letdown. The missions are fun, but I (and many others) were really hoping you could co-op through the entire game, with varying difficulty depending on the number of people in your party, or your Assassin level. It just feels like another tacked on feature. The seemingly endless customization options for Arno are great but they suffer from Ubisofts “new” micro transaction system and a pay to win mentality. Thank god there is no PVP multiplayer from past Creed games this time around, as forums would be full of people whining about the pay to win system there.

Assassin\'s Creed: Unity! Or: How I learned to stop stressing and love in game bugs.\r\nWho let this buggy mess of a game be released? Do games at Ubisoft not go through quality assurance tests anymore? Did they fire their in house game testers? 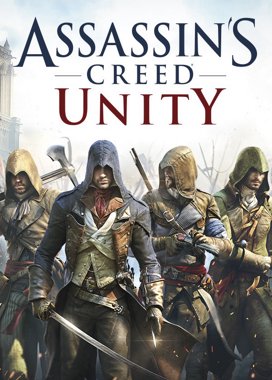 If you can overlook the bugs, lack of co-op story missions, and lackluster story, AC: Unity is for you!

Assassin's Creed Unity is a beautiful game when it wants to be. As a first entry into next-generation gaming, Ubisoft has a lot of work to do. Once the bugs are fixed, the game might be worthy of a discount pick up.
Overall
6.5
Story
6.0
Gameplay
6.5
Graphics
8.0